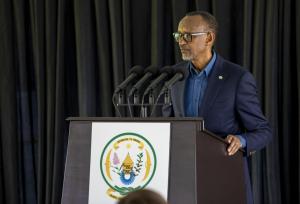 On World Cancer Day celebration 04/02/2020, Rwanda inaugurated the up to date Cancer Centre equipped with Radiotherapy.  His Excellency President Paul Kagame spoke on the important role the new centre will play in the lives of patients living with cancer, “now, many more Rwandans will be able to get the care they need with their families close by”, he said.

The Government of Rwanda embarked on a journey to decrease the burden of disease through prevention, early detection, treatment, and care interventions. In 2016, the idea for a modern radiotherapy cancer centre, called Rwanda Cancer Centre (RCC), was established at Rwanda Military Hospital (RMH) in Kanombe as the first step in ultimately providing a full-service cancer centre. At the time, RMH already had advanced and existing cancer services in place and the human resource skills required to run the radiotherapy.

Constructed by UNTEC, a French company, and funded by the Government of Rwanda, the Global Fund, and the CDC: Centers for Disease Prevention, the centre became operational in March 2019 and officially launched on 4 February 2020, in observance of World Cancer Day. His Excellency, President Paul Kagame, served as the guest of honor and the event was attended by Ministers, partners, and stakeholders.
Over the last ten years Rwanda has made remarkable gains in health by placing the health and wellbeing of the Rwandan people at the forefront of the agenda. The health sector continues to strive for Universal Health Coverage (UHC) with the goal of ensuring preventable, curative, and supportive care for all. However, while disease burden is becoming increasingly controlled, challenges remain particularly among non-communicable diseases.

The cancer burden has come to the forefront, especially in low- and middle-income countries, and Rwanda has worked to identify solutions to tackle the vast financial and human resource requirements of such diseases.

Globally, cancer is among the leading causes of death, claiming over 70% of its victims in low- and middle-income countries, where prevention and treatment remain limited. In 2018, estimates from the International Agency for Research on Cancer (IARC) indicate the incidence in Rwanda to be 10,704 new cancer diagnoses, 4,520 cases among men and 6,184 cases among women were registered and annual mortality rates stood at 7,662. In addition, 50% to 60% of all cancer patients require radiotherapy in the course of their treatment.

The increasing cancer burden in Rwanda, and the limited accessibility of the general population to treatment, required the Government of Rwanda to act. Four years ago, less than 10% of the population in need was able to access treatment and about USD 1 million was spent on international transfers for radiotherapy treatment. Through referral boards and the support of different funding entities including the Ministry of Health, Ministry of Defense, and private insurances, patients were forced to seek care radiotherapy abroad.

The newly completed radiotherapy unit is made up of two linear accelerators using Volumetric Modulated Arc Therapy (VMAT), which directly administers radiation to cancerous tumors, and one CT scan for treatment planning purposes. Thus far, 350 patients have been treated, and of the 350 treated patients, more than 57% have been covered by “Mutelle de Sante” while others have been privately funded. Currently, the centre is averaging 50 patients per day with the capability to treat up to 150 patients per day at full capacity.

The facility will complement existing prevention, diagnosis, and treatment services including a 20-bed chemotherapy unit already in operation. In addition, the centre will allow full scale up of screening and early detection for cancers such as cervical, breast, and those related to hepatitis C virus.

Future plans indicate further diagnostic and inpatient services to be gradually added in order to provide comprehensive cancer treatment and palliative care to those with late state diagnosis. In addition, specialists are currently being trained in order to provide the necessary skill level and staff are currently undergoing training with the support of the International Atomic Energy Agency (IAEA).
The launch date coincided with the official launch of the first National Cancer Control Plan, the National Cancer Registry, and the National Cancer Management guidelines, three key milestones for the success of the cancer centre. The implementation of the 2020-2024 National Cancer Control Plan is intended to reduce cancer mortality and morbidity nationwide. A national symposium on Cancer was also organized on 05/02/2020.

The event also served as an opportunity to not only focus on treatment, but also prevention, as cancer prevention is the most cost effective and sustainable intervention to control the disease. The audience was also sensitized on risk factors and methods to implement prevention methods into everyday lives.