The Republic of Congo starts vaccinating 2.2 million children against Measles and Rubella 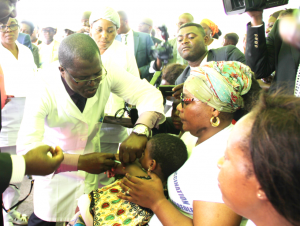 The Republic of Congo starts vaccinating 2.2 million children against Measles and Rubella

BRAZZAVILLE - March 5 - 2019. Under the high patronage of the President of the Republic of Congo, His Excellency Denis SASSOU NGUESSO, the Government of Congo launched today a measles and rubella vaccination campaign, which aims to provide protection to more than 2.2 million children. This campaign, which targets boys and girls aged 9 months to 14 years will cover 43% of the country's population and will also include Vitamin A supplementation and mebendazole deworming for children aged 9 to 59 months.

The launch took place at the Blanche Gomez Maternal and Children’s Hospital in Brazzaville.

Minister of Health and Population, Lydia Mikolo, stressed that "the health of the Congolese people in general and that of children in particular remains a priority for the Government. The Government will spare no effort to ensure that every Congolese child is in the best possible state of health and well-being. Vaccination plays an essential role in reaching this objective."

Under the leadership of the Ministry of Health and Population, the initiative is part of the implementation of the Global Strategic Plan for the Elimination of Measles and Rubella 2012-2020, which is receiving technical and financial support from Gavi, the Vaccine Alliance, the United Nations Children's Fund (UNICEF), and the World Health Organization (WHO).

This launch will be followed later this week by the introduction of two doses of the combined measles and rubella (RR) vaccine into the Republic of Congo’s routine vaccination schedule, which is part of the global strategic plan.

In 2018, 98 countries worldwide reported more cases of measles than in 2017, marking a setback in the progress made in the fight against this highly preventable but potentially fatal disease. The vaccine is safe and effective.

"With the launch of the measles and rubella vaccination campaign, Congo is taking a major step forward today by protecting its children from two deadly diseases," said Anuradha Gupta, Deputy Executive Director of Gavi, the Vaccine Alliance. "We would like to commend the leadership of the government and His Excellency the President of the Republic of Congo. Primary health care, which includes immunization, is the foundation of strong health systems, and strengthening these services is a truly effective way to protect the health of every citizen. Gavi is at your side to protect all the children of Congo from deadly diseases that can be prevented by vaccination. »

Measles and rubella vaccination aims to reduce measles mortality and morbidity in children and eliminate the risk of fetal malformations, miscarriages and fetal death due to rubella. Vitamin A supplementation is essential for child survival and growth, and mebendazole deworming eliminates intestinal worms that cause anaemia, hinders child development and reduce children's learning abilities.

"We congratulate the Government of Congo on this high-impact campaign that combines immunization, Vitamin A nutritional supplement and deworming," said UNICEF Representative in Congo, Micaela Marques De Sousa on behalf of the United Nations system agencies. "These investments will save the lives of thousands of children and contribute to their full development. We will continue to support the government in strengthening the supply chain and cold chain for routine immunization.”

Nearly 8 000 health workers will be deployed across the country to implement the vaccination campaign and other interventions. "We have seen an upsurge in measles cases in the Congo and other parts of sub-saharan Africa,” said Dr Matshidiso Moeti, WHO Regional Director for Africa. “With this vaccination campaign, Congo’s young people will be protected against one of the world’s most serious health threats to children.”

The campaign will mobilize political and administrative authorities, local health committees, religious and traditional leaders, private companies and the media with the aim of encouraging mothers to bring their children to health centres to get vaccinated.