The reality of challenges in malaria elimination 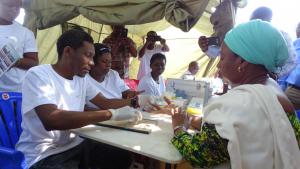 The reality of challenges in malaria elimination

The United Republic of Tanzania is among 11 countries that contribute 55 percent of new malaria cases globally according to WHO Malaria report published in 2018. The national HMIS data showed that malaria related deaths decreased from 20per1000 cases in 2014 to nine per 1000 cases in 2018. However, this has not taken Tanzania from the list of high burden countries.

Community members in Kilwa know that diagnostic and medication for malaria are available without paying, except for registration.

“Yes, malaria services are free but sometimes we get no medication because supplies are not available,” said Joseph Mpili, a villager in Rufiji district.

At the core, in the fight against malaria, is poverty. Villagers in Rufiji District, another project district, say the average household income is US$ 0.8/day.

“Things get worse during the farming season because we have used most of the food and have not harvested. At that time families could barely afford even TZS 2,300 (US$ 1) cost sharing for registration at public health facility,” says Mohamed Mkwambe. They opt for traditional herbs and would only go to a health facility when the health condition worsens.

WHO’s Strategic Advisory Group on Malaria Eradication (SAGme) report released in August 2019 advises that accelerated research and development (R&D) in new tools for malaria prevention and treatment is key if the world is to eradicate malaria in the foreseeable future. This is because there are still numerous challenges toward malaria eradication.

In this context, WHO is evaluating the performance of this novel malaria intervention that intensifies community surveillance and antimalarial treatment in the foci with the highest incidence to fight malaria in Tanzania.

The China—Tanzania malaria project is implemented in the districts with high and moderate malaria transmission in Tanzania. In its first phase (April 2015 to June 2018,) the project achieved a malaria reduction of 70 percent. It provided screening and antimalarial services in 18 villages of nearly 60,000 population in Muhoro and Ikwiriri within Rufiji District. The project conducted weekly focused screening and treatment (mRCT) which is reactive community testing by community health workers through mobile health teams in hot spot areas identified based on stratification using recent weekly data from the facilities.

The project’s second phase began in July 2019. A visit to the project areas puts the challenges to eliminate malaria in Tanzania in perspective. The major challenge—access to health services—amidst other challenges such as affordability, availability and quality of malaria services.

Another issue on the ground is insufficient knowledge about prevention. In Nahama village in the Coast region of Tanzania, Fatuma Magunga, village leaders say, struggles to convince people eliminate mosquito breeding areas near their homes.  “Most people understand conditions that facilitate mosquito breeding. They also believe that individual households cannot deal with that problem,” said Magunga.

The global data shows that only one in five pregnant women living in areas of moderate to high malaria transmission in Africa can obtain the drugs for treatment should she be diagnosed with malaria. Half the people at risk of malaria in Africa sleep under an insecticide-treated net and just 3% are protected by indoor spraying with insecticides.

Malaria affects the most vulnerable populations in countries where it endemic. Children under five account for 61% of all malaria deaths. More than 90% of the world’s 400,000 annual malaria deaths occur in sub-Saharan Africa.

WHO emphasizes the urgent need for countries to advance towards universal health coverage and improve access to services, and better surveillance to guide a more targeted malaria response.

In an effort towards universal health coverage, the Government has instituted Community Health Fund as an affordable health insurance. In addition, the Ministry of Health, Community Development, Gender, Elderly and Children and partners are pooling together resources to jump start progress in malaria elimination.  Tanzania committed to eliminate malaria by 2030. The China—Tanzania project is one of these interventions.

“WHO is making sure that the quality of interventions in the project adheres to international standards and conforms to the national guidelines. The results of the project are important to determine if the approach of the project will be suitable to be replicated in other areas with similar malaria levels,” said Dr. Ritha Njau, Malaria Program Lead at WHO Tanzania.