Reaching more than 8 million children with the Measles Rubella vaccines 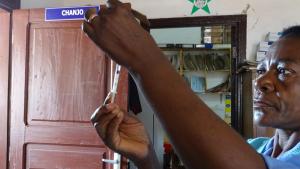 Reaching more than 8 million children with the Measles Rubella vaccines

Evaline William sits on a wooden bench at a vaccination point, carrying on her lap two-year-old, Precious Wolfgang.

The congestion has eased at the vaccination area at Sabasaba health facility in Morogoro regional town, 200 kilometers from Dar es Salaam, the commercial capital of Tanzania. Earlier in the morning, Evaline was not encouraged to take her daughter for vaccination. Afterall, Precious has received all vaccines as per the national schedule.

This month, Tanzania with the support from WHO and partners launched a nation-wide campaign in more than 8,000 vaccination centers. In this campaign two vaccines—measles rubella and IPV vaccines—were administered at once. This is the first time the country has implemented a vaccination campaign in this approach -- giving two injectable vaccines at once.

In her remarks during the launch, the Minister of Health emphasized cost effectiveness of vaccination. “Vaccination is a smart investment both for the nation and families because it cuts costs that would have been incurred to treat diseases that we can immunize against,” she said and goes on to cite an example "Our facilities no longer have children wards for diarrhea because of high coverage of the Rota virus vaccine".

Back at the Sabasaba health facility, Evaline had some doubts that need to be cleared. “I have heard that some vaccines can have side effects, so I was not very much convinced at the beginning until I talked to the nurse at the clinic and changed my mind." she says smiling.

The current national immunization coverage is at 95 percent. When the routine immunization programme started in 1975, only five routine vaccines were given. Today, children like Precious are receiving 9 vaccines, protecting them against 13 vaccine preventable diseases.

MgeniJuma, a father of five for instance, proudly holds his three-year-old Majid who took two shots: one for Measles and rubella and another one for polio. “I always bring my children to the clinic and we have never skipped a vaccine or a clinic visit,” says Mgeni.

People turned out in big numbers at vaccination points in rural and urban areas. At a rural village in Manyara, villagers walk a couple of kilometres on dusty footpaths, then sit with their babies under a windy shade of an acacia waiting for their turn to get the vaccine shots.

In preparation for the roll out, the World Health Organization (WHO) and partners supported training of health care workers, printing of communications materials and supportive supervision for the campaign.

The current immunization campaign is expected to contribute to national efforts to eliminate measles and rubella and move closer to eradication of polio. “We need to be vigilant to prevent polio importation to Tanzania. Polio virus is still circulating in the neighbouring country of DRC and our country is at risk", said Dr. Tigest.

“Let us use this campaign as opportunity to  improve uptake of routine immunization especially MR second dose which is currently at 80% while the target is to reach a coverage of 95% and intensify measles and rubella case-based surveillance,” said Dr. Ketsela during the launch.

In line with the Global Vaccine Action Plan, measles and rubella are targeted for elimination in five WHO Regions by 2020. WHO is the lead technical agency responsible for coordination of immunization and surveillance activities supporting all countries to achieve this goal. 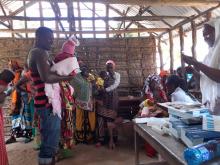