Polio- We have won a battle, but the war is still on-Professor Tomori 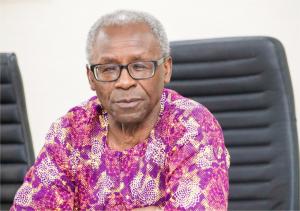 Polio- We have won a battle, but the war is still on-Professor Tomori

Professor Oyewale Tomori, a leading virologist who helped spearhead Nigeria’s effort to kick out polio from the country is saying the outbreak of cVDPV2 is telling us that we have won a battle, but the war is still on.

A multiple-award-winning specialist in human, zoonotic and veterinary viruses including the poliomyelitis virus and immediate-past president of the Nigerian Academy of Science, Professor Tomori was appointed as the Regional Virologist for the WHO Africa Region in 1994. Here, Professor Tomori narrates his support on the long journey to a polio-free Nigeria and how the country can tackle the Circulating Vaccine Derived Polio Virus type 2 (cVDPV2) outbreak in Nigeria.

The call to serve
I served for 10 years between 1994 and 2004 as the Regional Virologist and Coordinator, Africa Regional Laboratory Network. I was charged, among other duties, with setting up the laboratory network in support of polio eradication.

Prior to my joining the WHO, and after retirement, I served and continue to serve in providing technical advice and support on the laboratory for infectious disease prevention, control and response.

Nigeria getting it right

I think the establishment of the Emergency Operation Centre (EOC) was a positive turning point. It allowed for real time data analysis and response to issues from the field. In addition to that, the use of modern communication technology to reach inaccessible locations assisted in keeping record of vaccination progress in the areas. Above all, the engagement and involvement of traditional, religious, and civil society leaders had a more enduring and sustainable positive effect on the programme

Your indelible polio eradication stories
Three things stuck.  First in 2003, when there was a boycott of polio vaccination in Nigeria, and the disease spread to the point we were reporting an average of three cases per day in Nigeria. That was a painful and embarrassing period. I am glad we got over it, but before then, Nigeria became the chief exporter of poliovirus to many countries, as far as to Yemen and Indonesia.

The second indelible memory was the report of four wild polio cases in 2016, after we had gone for two years without a case. It was a day of sorrow and devastation. We were already dreaming of being declared polio free, planning the celebration and out of the blues we were brought to the reality.

I am glad that we did not relent and finally came to my third indelible memory: that day on August 25, 2020, when FINALLY, Nigeria and ultimately Africa was declared wild poliovirus free. I am not shy to say I shed a drop or two of joyful tears for Africa, my country, and the future generation of Africa’s children, who will never again suffer the paralysis of, or death from polio

cVDPV2- What can the country do differently
The outbreak of cVDPV2 is telling us that we have won a battle, but the war is still on. Because there are still two countries in the world that are still endemic for wild poliovirus. The circulation of cVDPV2 in Nigeria, tells us that there are still many vulnerable children around who have either not received their polio vaccination or are insufficiently protected. Remember the wordings on the POLIO FREE CERTIFICATE, it says "...the transmission of indigenous wild poliovirus has been interrupted”. This should tell us that wild poliovirus from other endemic countries can still be imported and for the virus not to circulate our children must be adequately protected, especially our new-born babies and Nigeria has millions of new babies every year. Therefore, more than ever, our routine immunization must remain high and much higher than when we attained the polio-free certificate. We cannot and must not relent on our efforts to fully vaccinate all our children

Advice to public health professionals in controlling preventable diseases
Preparedness is the key to the detection, response and control of preventable diseases. Indeed, preparedness is the first law of prevention. Get your surveillance active and alive, involving all stakeholders at every level and stratum of the society, clearly identifying and defining roles.  With a reliable and robust disease surveillance system, which efficiently manages data for planning and action, it will be easy to detect early and on time, a sporadic case before it becomes a public health event of national or international concern