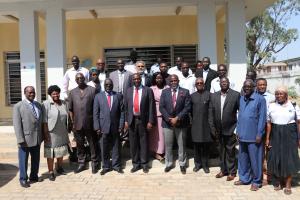 Juba, 23 January 2020 – A delegation of the Africa Regional Certification Commission (ARCC) for poliomyelitis eradication starts a two-week visit to South Sudan to verify the accuracy and extensiveness of the complete national documentation for polio-free status prepared by the Republic of South Sudan.

During the visit, the ARCC delegation will thoroughly review the complete national documentation prepared by South Sudan.

The team will also visit field offices, county health departments and health facilities in Western Equatoria, Jonglei and Warrap to determine the sensitivity of the Acute Flaccid Paralysis (AFP) surveillance system and the implementation of the polio eradication programme.

South Sudan is expected to present the complete national documentation to the ARCC meeting planned from 31 March to 3 April 2020 to be labelled polio-free status.

The ARCC is an independent and the only body that is mandated to certify the Africa Region to have eradicated poliovirus. This will be effective only when all the 47 member states of the African Region will have their complete documentations accepted by the ARCC. Currently 43 out of the 47 countries have had their complete documentations already accepted by the ARCC.

Sudan polio eradication journey has been supported by the polio committees (NCC, NPEC, NTF) who oversee certification activities in South Sudan with the facilitation of the Ministry of Health and WHO.

“I am confidence that the AFP surveillance system in the country  is sensitive enough to detect a case of WPV of polio event”, said Dr Rose Mapour, the NCC Chair for South Sudan.  The country has met the conditions to submit its polio free documents with the last case of WPV detected almost 10 years ago.

Countries become eligible to present its final complete national documentation after three years since the last case of a wild poliovirus in the country and also with evidence of a strong and sensitive surveillance system. Additionally, countries need to maintain high immunization coverage for polio vaccine.

“The country remains on track to be certified polio free considering the sensitivity of the surveillance system, the strong partnership with UNICEF, CORE group and the Access for Humanity under the leadership of the Ministry of Health”, said Dr Olushayo Olu, the WHO Representative for South Sudan. Innovations such as the environmental surveillance, use of mobile technology and functional polio committees who oversee the process gives credence to the program and its goals.

Note to Editors
Polio is a highly infectious disease caused by a virus that mainly affects children under five years of age. The virus is transmitted by the fecal-oral route and by aerosol droplets. It can evade the nervous system and cause irreversible paralysis. Polio was the leading cause of lower limb paralysis in the pre-vaccine era, crippling over 350 000 children annually.  In 1996, poliovirus paralyzed more than 75 000 children in the African continent.