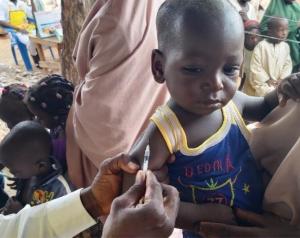 Abuja, 4 October, 2019 - In a bid to bolster immunity of eligible children, the Federal Government of Nigeria supported by the World Health Organization (WHO) and other partners immunized over 51 million children during the annual national immunization campaigns.

The intervention conducted in phases, from 30 July-30 August 2019, reached 51,151,924 eligible children across 36 Nigerian states and the Federal Capital Territory (FCT).

“To make this campaign a success, we engaged house to house vaccination teams comprising mainly women, mobilisers and town announcers. Parents of infants from 0 to 59 months were informed well in advance of the campaign and we administered vaccines in both fixed and temporary posts,” says Alhaji Yusuf Musa, Executive Secretary, Zamfara State Primary Health Care Development Agency.

Expressing her joy, Mrs Omoyemi Ojo a mother in Lagos State in the South-west said, “I am so happy my daughter was given oral polio vaccine right here in my house,” she said. “It just made life a lot easier for me, especially as a new mum.”

On 21 August 2019, Nigeria, the last country to record wild polio virus (WPV) case in Africa, marked a major milestone in the history Polio Eradication Initiative (PEI) after reaching three years without reporting any case of WPV.

Speaking on the outcome of the national campaign, Dr Fiona Braka, WHO Nigeria’s Immunization Team Leader said, “The essence of this campaign was to ensure eligible children are protected from vaccine preventable diseases.”

She said, “Even though Nigeria is edging closer to being certified wild poliovirus (WPV) free, we will not relent in ensuring all children are fully protected not just against polio but other vaccine preventable diseases too.”

Despite the progress, challenges – including inaccessibility due to conflict and insecurity in some areas, variations in campaign quality, massive mobile populations and, in some instances, parental refusal – have prevented health workers from reaching all children everywhere with polio vaccines in Nigeria.

Working through the National Emergency Operations Centre, WHO and partners continue to support the Government of Nigeria to surmount these challenges to ensure all children are vaccinated against polio until the virus is eradicated everywhere in the world.