Over 3.4 million persons vaccinated against Yellow Fever in Rivers State 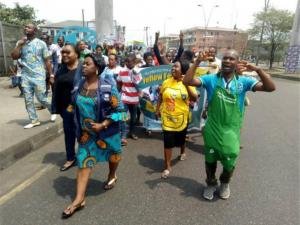 Over 3.4 million persons vaccinated against Yellow Fever in Rivers State

Port Harcourt, 12 March 2020 - “All four members of my family have been vaccinated against yellow fever in this ongoing vaccination campaign,” says Tonma Oruye.

“It’s a good thing that the government is administering this vaccination free of charge, this shows how concerned they are with the people’s health. I made sure everyone in my household got vaccinated, my husband, myself and the children. I encourage others do the same."

Mrs Sylvia Obomanu who also brought her granddaughters for vaccination stated "I'm happy that the government is providing this vaccination to protect people from this disease. I want my grandchildren to be vaccinated, I also want to be vaccinated but was told I am not eligible.”

Both women are part of the over 3.4 million beneficiaries of the recently concluded phase one vaccination campaign in the state.

Following the first ever confirmed outbreak of yellow fever in Rivers State in 2018, with a 100% case fatality rate, the Federal Government through the National Primary Healthcare Development Agency (NPHCDA) and partners decided to conduct the Yellow fever Preventive Mass Vaccination Campaign (PMVC) in the State.

The Rivers State Immunization Officer, Dr Joseph Urang stated that “out of the targeted 6.8 million people, over three million eligible persons have been covered at the end of the first phase of the campaign which was implemented in 11 out of the 23 Local Government Areas (LGAs) of the State. Phase one ended on the 08 March, 2020.

The campaign can be adjudged as successful, due to the massive turnout at most vaccination posts in the state. This resulted from widespread sensitization activities on the PMVC in multiple languages via the media, phone in radio programs, and dialogue meetings with stakeholders and influential community members.

The second Phase of the Yellow fever PMVC campaign commences on 13 March, 2020 and would be implemented for 10 days with an extra day planned for mop up activities to target those who may have been missed during the campaign days.

Dr Urang further stated that “We have made arrangements for hard to reach areas; mostly riverine communities. Health workers have been engaged to ensure the riverine communities are covered. Our aim is to make sure everyone within the targeted population is covered and that there is no record of yellow fever in the State again."

The vaccination campaign is being conducted with technical support from the World Health Organization. 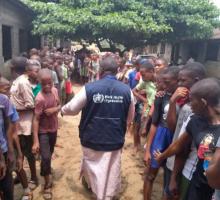