Addis Ababa, Ethiopia, 31 October 2017:  The Government of Ethiopia released its first ever GATS findings in a workshop officially opened by Mr. Yehule Denekew, Director General of FMHACA. A series of key note addresses were delivered by Dr. Paul Mainuka, on behalf of the WHO Representative to Ethiopia Dr. Akapka Kalu following the welcoming speech by Dr. Tsegereda Kifle, Deputy Director General of the Ethiopia Public Health Institute. More than 200 participants from the House of People’s Parliament, Embassies, Officials from Federal Ministries and Regional Bureaus, universities, civil society organizations, FMHACA and WHO attended the workshop.

In his opening remark, Mr. Yehulu Denekew, Director General of FMHACA said that the first ever GATS findings filled in the gaps the country was experiencing due to lack of adequate data and information to understand the patterns of tobacco use and inform strategies. Citing some of the major results of the survey and outlining policy implications for possible actions, the Director General declared the first National Tobacco Control Strategic Plan for 2017/18 to 2019/2020 developed using GATS findings.

Dr. Paul Mainuka, on behalf the WHO Representative Dr. Akpaka Kalu commended FMHACA, EPHI and partners who have been collectively working with the support of WHO and CDC for successfully completing the first ever Ethiopian GATS. He stressed also the growing trends of tobacco use and other addictive substances which pose serious threats to the country’s socio economic development and urged all stakeholders and partners to work together to support the tobacco control program.

Congratulating on the release of both the GATS findings and the three years National Tobacco Control Strategic Plan,  Dr. Mainuka  called on partners to keep up the momentum of the national and regional efforts to meet the targets to reduce tobacco use by 30% in 2030 which will contribute to meeting the SDG 3.4 target. 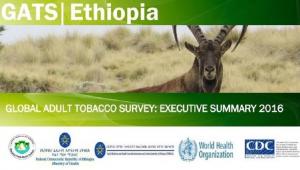