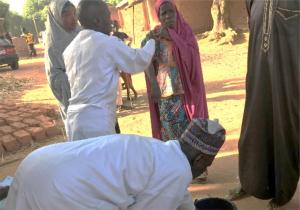 Abuja, 7 September, 2019-The Federal Government, in collaboration with the World Health Organization (WHO), Gavi, the Vaccine Alliance and partners, is launching a Yellow Fever (YF) reactive vaccination campaign, in three States to help control an expanding YF outbreak in Nigeria identified in Ebonyi.

The 10-day campaign (07-16 September 2019), to be implemented in parts of Ebonyi (3 LGAs), Benue (2 LGAs) and Cross River (1 LGA) States, targets vaccination of 1.6 million people (aged 09 months to 44 years old) to contain the outbreak in affected areas. The campaign, supported by Gavi, will use 1,802,044 vaccine doses provided by the International Coordination Group (ICG) on Vaccine Provision, funded by Gavi, the Vaccine Alliance.

“This vaccination campaign will be a crucial activity to stop the spread of the outbreak and ensure that all people at highest risk are safe,” says Dr Clement Peter, Officer in Charge, WHO Nigeria. “We encourage all eligible persons in the target LGAs to come forward and get vaccinated,”

Since May 2019, more than 55-suspected cases have been reported across eight LGAs in Ebonyi State most of which have been reported in recent weeks from Izzi LGA. Already, nine of the suspected cases had samples that tested positive for Yellow fever and further tests are pending. The outbreak has resulted in a high number of deaths as 20 of the suspect cases have died (case fatality ratio (CFR) 40%). The scope of the response is therefore in Izzi LGA and surrounding LGAs with contiguous borders (such as, Abakaliki in Ebonyi State, Yala LGA in Cross River state, and Ada and Oju LGAs in Benue State).

A rapid response team (RRT) under the leadership of National Primary Health Care Development Agency (NPHCDA) and Nigeria Centre for Disease Control (NCDC), composed  of  Ebonyi State health authorities, WHO and other  partners, was deployed to investigate the cases, strengthen efforts to control virus circulation and sensitize health workers and communities on prevention methods against Yellow fever.

While vaccination is the best-known measure for keeping people protected for life, Dr Joseph Oteri, NPHCDA Director Disease Control and Immunization, implores people to protect themselves and their families. According to him, “Reducing exposure to mosquitoes, including the use of insect repellent to avoid bites both during the day and at night and removing potential breeding sites such as standing water containers are also effective.”

The response of the outbreak in Ebonyi State is part of the global strategy to Eliminate Yellow Fever Epidemics (EYE) by 2026. With the support from WHO, UNICEF, Gavi, the Vaccine Alliance and more than 50 partners, Nigeria has developed a 10-year strategic elimination plan to improve yellow fever diagnosis capacity, childhood immunization and overall population immunity in all states.

Nigeria is a priority country for the EYE Strategy and it is expected that more than 75 million people will be protected against yellow fever in the country by the end of 2021.

The impact of the EYE strategy is already tangible, with more than 35 million people vaccinated during outbreak response and preventive mass campaigns aimed at establishing high population immunity. Efforts will continue towards full implementation of the EYE 10-year plan to eliminate yellow fever outbreaks.

“Thanks to the leadership of the Nigeria Center for Disease Control, yellow fever surveillance has strengthened and improved, enabling quick outbreak detection and rapid response,” said Thabani Maphosa, Gavi Country Programmes Managing Director. “However, the global vaccine stockpile is our last line of defense against the growing threat of yellow fever outbreaks. The most important long-term strategy is high coverage of yellow fever vaccination during preventive campaign and in routine immunisation so every child is protected, preventing outbreaks from happening in the first place.”

For the record, from the onset of the outbreak in September 2017 to December 2018, 3,902 suspected cases were reported from all 36 States and the FCT in Nigeria.  Out of the 3,295 samples collected and tested, 185 were presumptive positive in country and were sent for confirmation to the Institute Pasteur (IP) Dakar for further testing.  From the results, 78 positive cases from 14 states (Kwara, Kogi, Kano, Zamfara, Kebbi, Nasarawa, Niger, Katsina, Edo, Ekiti, Rivers, Anambra, FCT, and Benue States) were confirmed at IP Dakar (Source: NCDC).

Yellow fever is an acute viral haemorrhagic disease transmitted by infected mosquitoes. The "yellow" in the name refers to the jaundice that affects some patients. Symptoms of yellow fever include fever, headache, jaundice, muscle pain, nausea, vomiting and fatigue. Vaccination is the most important means of preventing yellow fever. To prevent further spread, pre-emptive vaccination campaigns are required in neighboring areas not directly affected by the ongoing yellow fever outbreak and reactive campaigns, but face heightened risk and vulnerability.