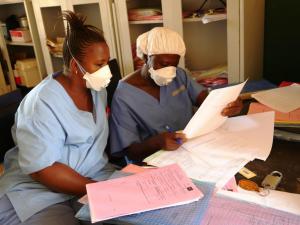 29-year old Alpha* is among the first patients treated for multidrug-resistant tuberculosis (MDR-TB) in Sierra Leone. According to him, the journey to treatment success at the Lakka Government Hospital in Freetown was “long and rigorous,” but one that would restore his life and dignity.

When Alpha started feeling unwell in 2013, he was unaware it was tuberculosis. He self-medicated and bought a range of over-the-counter medicines, but his health continued to deteriorate. “I had been coughing for several days but one evening it got so serious that I coughed up blood. That was when I was finally taken to Connaught Hospital,” he explains.

When he tested positive for tuberculosis, Alpha was immediately put on the six months standardized short course anti-TB treatment under direct observation (DOT). It requires daily tablets taken at the same time of day for six months under the supervision of a trained health worker. If taken as specified, cure rates for tuberculosis are very high - usually at about 95%.

However, three months after commencement, Alpha defaulted on his treatment. “I was feeling so healthy that I thought I no longer had the disease. I also didn't want to risk people seeing me at the DOT centre, or be seen sitting among other severely sick patients,” he says.

Discontinuing treatment without a doctor’s advice or not taking it as prescribed can lead to resistance of the TB bacteria to the available medications. When this happens, the disease can become more difficult, more costly or even potentially, impossible to treat.

According to the WHO Global Tuberculosis Report 2017, an estimated 4.1% of TB cases are now thought to be resistant to standard first-line medicines, of which an estimated 6.2% are extensively drug-resistant, or XDR-TB. This means that the bacteria is resistant to at least two groups of second-line drugs, injectables and fluoroquinolone, in addition to first-line medicines.

“The long treatment time associated with tuberculosis can lead to people discontinuing treatment as they feel better, especially because stigma and misunderstanding about TB is still very high at the community level,” explains Abdul Sesay, a civil society advocate against TB in Sierra Leone. “Imagine when a TB patient decides not to disclose their status to close family members, not even their husband or wife: that tells you how serious a problem stigma is in our communities. This fear of discrimination can directly impact the willingness of patients to come forward for medical care or complete a treatment course, which can then result in the development of drug-resistance and further medical complications.”

Almost one year after discontinuing the treatment, Alpha once again developed a persistent cough. Fearing recriminations, he visited a different health facility and claimed to be a first-time TB patient. He was put on the standard first-line treatment but his symptoms grew increasingly severe. Finally, he was once again referred to the Connaught Hospital, where he tested positive for MDR-TB.

At this stage, he was immediately transferred to the newly-established, dedicated Drug Resistant-TB facility at the Lakka Government Hospital where he would spend nine months, receiving what he referred to as “rigorous” treatment complete with strong daily medications. “I am grateful for the support I received from my family and the health workers at Lakka and I have no doubt that this saved my life,” he says, adding that he is also happy that none of his family members contracted the disease. “That guilt would have killed me, especially because I defaulted after having been advised to complete the treatment and also because I deceived myself and the health workers.”

Since commencing drug-resistant TB case management services in March 2017, the Lakka facility has now admitted some 120 drug-resistant patients (88 male and 32 female). A total of 31 have since been discharged; 11 have successfully completed the full nine-months regimen while the remainder, no longer infectious for the disease, will continue the full duration of their treatment course in their homes.

Alpha admits that he learnt profound lessons from his experience. “I would strongly advise anyone suspecting or testing positive for TB to be honest, seek immediate care from the nearest health centre and strictly adhere to instructions to complete treatment. Your health is your life and in the end, this matters more than fear of being seen or inconveniences of the treatment. Importantly, no one should be stigmatized because they are or were infected with TB since anyone can be affected. Patients need support and the health system needs resources. Let’s fight the course together.”

Together with the Global Fund and the United States Agency for International Development, NGOs and community partners, WHO is supporting the Government of Sierra Leone to improve diagnosis, surveillance and treatment of TB in all corners of the country, working to challenge stigma, and raising awareness on available services. WHO has supported extensive training of health ministry staff in DR-TB diagnostics using GeneXpert technology, clinical case management, development of DR-TB specific guidelines, and a study-tour to the well-functioning DR-TB treatment programme in Cameroon.

*Names have been changed for confidentiality