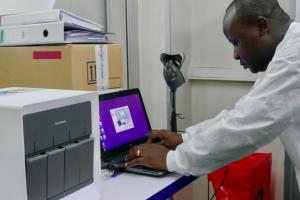 Laboratory testing of samples is essential to rapidly assess the scope and spread of any Ebola outbreak. Since the major outbreak in West Africa in 2014, an increasing number of diagnostic tools have become available to perform rapid initial testing of samples. The Democratic Republic of the Congo is using these new tools, as well as classic ones, to respond to an ongoing outbreak of the virus in a very remote area of the north east of the country.
A small cluster of undiagnosed illness and deaths with haemorrhagic signs was reported in the Province of Bas-Uele in early May. Congolese scientists quickly gathered samples, shipped them to Kinshasa and tested them at the National Institute of Biomedical Research (INRB). The results, subsequently confirmed by the Centre International de Recherche Médicale de Franceville (CIRMF), a WHO collaborating centre in Gabon, showed this is an outbreak due to Ebola virus disease (Ebolazaire).

As soon as the outbreak was detected, the Ministry of Health, together with WHO and other partners, mobilized laboratory resources to ensure investigations could be conducted as quickly as possible to guide the response. In addition to the testing facilities available at the INRB in Kinshasa, an INRB mobile field lab was quickly dispatched to the affected health zone of Likati.

To control the outbreak, multi-disciplinary field teams in Likati have been actively searching for suspect cases. Anyone presenting with certain pre-defined symptoms, such as sudden onset of fever and/or unexplained bleeding, is considered a suspect Ebola case until laboratory results prove otherwise. Discarding suspect cases that test negative for Ebola allows response teams to focus on tracing only the contacts of those who have either tested positive or whose status is unknown.

The MOH, WHO and partners have rapidly set up an intensified field alert and response system in Likati. This is resulting in early identification of suspect cases detected in the affected zone. The field laboratory provides the capability to rapidly test samples on site and focus support and follow-up on any new laboratory confirmed cases and contacts. In this extremely remote and challenging area, this mobile lab is providing a core element of robust surveillance, which is essential to bringing this outbreak to an end as quickly as possible.

One of the technologies being used to detect Ebola in DRC is GeneXpert, which was primarily developed to detect cases of tuberculosis, but has been adapted to enable rapid testing of many pathogens – HIV, malaria, STIs, and Ebola. At the INRB laboratory in Kinshasa – with support from USAID, WHO, Canada, the Global Outbreak Alert and Response Network (GOARN) and the Emerging and Dangerous Pathogens Laboratory Network (EDPLN) – technicians can use GeneXpert to test for the Zaire strain of Ebola in just one hour. For samples that are negative, further testing is then undertaken to check for other strains of Ebola, other viral haemorrhagic fevers, or other diseases.

Other tests developed during the West African outbreak are also being deployed, such as OraQuick — a rapid diagnostic test, which has been developed with the support of the US Centers for Disease Control and Prevention and GOARN. In the field, OraQuick can test blood or saliva samples for Ebola in just half an hour.

Even if many or all suspect cases now being tested are negative, it remains vital to actively follow contacts of all confirmed, probable, and suspect cases for 21 days, and then to continue enhanced surveillance for an additional 21-day period. Any period of calm is an opportunity to continue building and reinforcing local and country preparedness and response capacities and ensuring rapid investigation teams are ready in case the virus should resurface.

This is the eighth outbreak of Ebola virus disease in the Democratic Republic of the Congo since the disease was discovered in the 1970s in DRC. Health authorities in this country are recognized throughout the African region and the world as experts in responding to outbreaks of this disease.