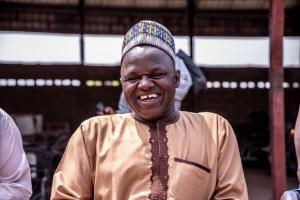 Ayuba Gufwan, 46, spent his childhood crawling on his hands and knees in a remote village in Nigeria’s Plateau State.

Paralysed by polio at age 5, he was unable to attend school until his uncle built him a hand-pedalled tricycle at age 19.

“That was a turning point,” recalls Gufwan. “It restored my hope, my dignity and put me on the path of progress again.”

With dignity, he returned to school – at the beginning. “I went back and finished primary and secondary school. But I couldn’t get into law school right away, so I attended a teacher’s college and earned a teaching position. Then, that same year, I got into law school and trained as a lawyer.”

Today, Gufwan is a qualified lawyer, charity co-owner, a proud husband, the father of five children and a national inspiration who dedicates his life to wiping out polio for good and supporting the many other polio survivors in Nigeria.

“The number one need for all people crawling on the ground is to have mobility,” Gufwan explains. “This is the foundation on which you can build any kind of rehabilitation.”

His co-run foundation – Wheelchairs for Nigeria – has built and given away more than 14 000 tricycles across the country so far and employs polio survivors in the building of them.

Polio is a highly infectious viral disease that mainly affects young children. One in 200 infections leads to irreversible paralysis, and among those paralysed, 5% to 10% die as their breathing muscles are immobilized.

“There is no cure,” Gufwan points out. “Polio can only be prevented by immunization.”

As a vaccine champion and working with the World Health Organization (WHO) and other partners, Gufwan travels nationwide, speaking at schools, communities and religious institutions on the need for a relentless, final push to end polio.

“Ignorance is a challenge,” he says. “Logistics can be a problem, too. Moving, storing and keeping vaccinations can be difficult in remote areas and villages without electricity.”

Through such initiatives as the global polio eradication initiative, polio cases have decreased by more than 99% since 1988 worldwide. Yet, as long as any single child is infected, children everywhere are at risk. Without eradicating polio from the few remaining hotspots, including Nigeria, up to 200 000 new cases could occur every year within 10 years.

“Vital work done by heroes like Ayuba Gufwan quite simply saves lives,” says Dr Matshidiso Moeti, WHO Regional Director for Africa, as she marks the beginning of World Immunization Week. “We are looking to work with more African leaders like Ayuba, to end polio and to ensure we reach the 1 in 10 children who still do not have access to vaccines more broadly.”

Immunization, adds Dr Moeti, “is one of the world’s most successful and cost-effective health interventions. Vaccines mean lives saved and lives lived – bringing a brighter future for our children and theirs to come.”

Celebrated every year in April, World Immunization Week promotes the use of vaccines to protect people of all ages against disease. The 2019 theme is “Protected Together: Vaccines Work”, with a campaign to celebrate vaccine heroes, like Gufwan, from around the world.

And back in his workshop in Jos, in central Nigeria, Gufwan sums up his message with steely clarity.

“My clear call as a survivor is that we step up the fight to finish polio off. We can’t relax. We need to raise the tempo. I’ve dedicated my life to telling the stories, to working with groups, families and organizations, on the necessity to end polio. And one day, I want to be able to stop making wheelchairs.”