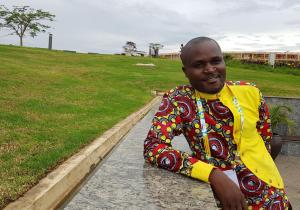 Kigali, 4 December 2019 – When Malawian community mobilizer Ajasi Bamusi turns up at football matches, he is keen on halftime. As the coach or the captain revs up team morale, he seeks to pass an important health message: encouraging men to get circumcised as part of HIV prevention.

“I negotiate with the team captain to use halftime to give a talk promoting voluntary male medical circumcisions,” says Mr Bamusi.

Twelve years ago, the World Health Organization (WHO) and the Joint UN Programme on HIV/AIDS (UNAIDS) recommended Voluntary Medical Male Circumcision as part of measures to prevent HIV infections. From 2008 to 2018, nearly 23 million men were circumcised and some 250 000 infections averted in 15 Eastern and Southern African countries.

Research shows that Voluntary Medical Male Circumcision (VMMC) is an essential prevention intervention, cutting by about half men’s risk of heterosexually contracting HIV.

Malawi is one of the 15 countries which the US President's Emergency Plan for AIDS Relief (PEPFAR), UNAIDS, WHO and other partners have prioritized in East and Southern Africa for receiving a package of health services, including VMMC.

“I know all the arguments men have for not getting circumcised and I have an answer for each one,” Mr Bamusi said during a session at the 1–6 December International Conference on AIDS and STIs in Africa (ICASA) in Kigali, Rwanda.

“Their biggest concern is how long do I have to stay without having sex. And when I say six weeks, they say do you want my wife to run away from me.”

But in the communities where Mr Bamusi works, there is a traditional belief that men need to wait at least two months after their wives give birth before having sex.

So Mr Bamusi uses that as a powerful counter-argument. Other common concerns are fears around possible pain during and after the procedure, and the three to twelve days of work the man may have to miss as they convalesce.

VMMC is a lifelong, cost-effective HIV prevention method. In the next decade, it is projected to prevent a further 660 000 infections in the 15 Eastern and Southern African countries.

“The impact of medical male circumcision is real. Every averted infection means more people living healthier lives,” said Dr Frank Lule, Medical Officer, WHO Regional Office for Africa. “But we still need to enhance knowledge and acceptance of VMMC as well as availability and quality of the full range of HIV prevention and treatment services.”

While significant progress in HIV prevention, including through VMMC has been achieved, more efforts still need to be made to reach more HIV-negative adult men, those at higher risk of HIV and sexually transmitted infections, and mature adolescents.

It is also critical that when adolescents are provided VMMC services, they are given a package of prevention measures relevant to their age, including safer sexuality education, condom education and provision of HIV testing and linkage to care and treatment if found positive, and managing sexually transmitted infections.

“We have been able to reach more (among) the younger generation. The challenge has been with the older generation,” said Deloune Matongo, a health promotion specialist from Zimbabwe and VMMC advocate.

“We are trying to put interventions targeting older men, for example work place programmes where we try to reach the men in their work stations, give them the information and have them come for the services in their free time.”

Using VMMC services as an entry point to a range of sexual reproductive and other health services will support the delivery of universal health coverage. Making VMMC an integral part of these other health services offered to all communities through a strong primary health care system drives to the core principles of access, quality and financial protection that are the basis for universal health coverage.