The President of the Republic of Namibia, His Excellency Dr Hage Geingob accompanied by the Honorable Minister of Health and Social Services, Dr Benhard Haufiku, visited the epicenter of the Hepatitis E outbreak in Havana settlement.    During his visit the President stressed the importance of community ownership in maintaining sanitation facilities constructed for their use and responsibility to maintain both personal and environmental hygiene.  He said that the settlement is illegal hence  service provision is limited and is compelled by the movement of people to this area.

The Minster was impressed with the work by City of Windhoek to clean the environment with community involvement.  He requested some community leaders to share their experiences on working with the City of Windhoek to maintain environmental hygiene.  Speaking on behalf of the four UN agencies (WHO, UNFPA, UNICEF and UNAIDS) represented during the tour, the WHO Country Representative, Dr Charles Sagoe-Moses emphasized the continued engagement with community leaders and members to sustain the efforts of the municipality and partners to contain the outbreak.  He elaborated on the collective support the UN is providing to government as part of the National Response Plan.

The visit is part of ongoing efforts by the Ministry of Health and Social Services to advocate for political leadership in containing the Hepatitis E virus outbreak and to harness political will and commitment beyond the outbreak.  Health is affected by conditions outside the sphere of the health sector and thus mobilizing support at the highest level will facilitate the prevention of ill health and eventually reduce the burden on the health sector.  Accompanying the president was also the Governor of the Khomas Region, Honorable Laura Mcleod-Katjirua, His Worship the Mayor of the City of Windhoek, Councilor Muzee Kazapua, local and regional authority councilors, the CEO of the City of Windhoek, Namibia Red Cross Society, U.S. Centre for Disease Control and Heads of UN Agencies from WHO, UNICEF, UNFPA and UNAIDS.

Kindly see the pictures from the visit. 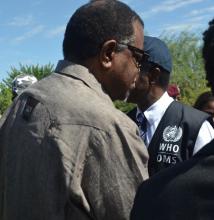 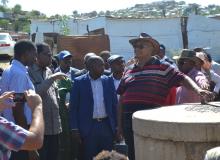 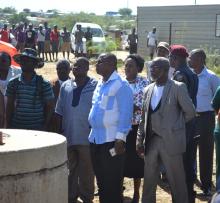 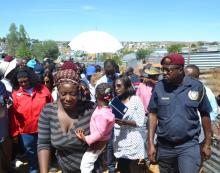 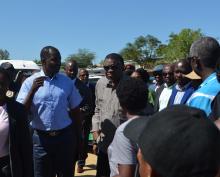 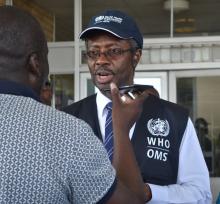 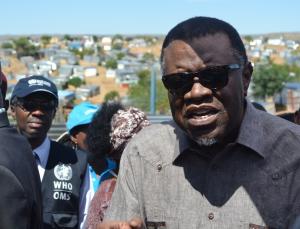 The President of the Republic of Namibia, His Excellency Dr Hage Geingob addressing the community of Havana informal settlement while the WHO Country Representative Dr Charles Sagoe-Moses looks on
Credits
Click image to enlarge
For Additional Information or to Request Interviews, Please contact:
Mrs Celia Kaunatjike