Namibia continues to strengthen its emergency preparedness and response 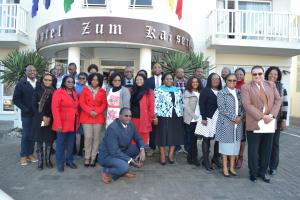 Namibia continues to strengthen its emergency preparedness and response

WHO is in the process of supporting the Namibian government strengthen its capacity for assessing and analyzing health risks and to integrate the results in its emergency preparedness and response plans. A workshop held in May 2019 to map the country’s vulnerability to all hazards and how these risks will be managed from a multi-sectoral perspective is part of a process which started in 2016 with a Joint External Evaluation (JEE) of the International Health regulations in response to an invitation by the Namibian government.

The acting Regional Director of the Ministry of Health and Social Services in the Erongo region, Dr.  Amir Shaker, highlighted the importance of the Vulnerability and Risk Analysis & Mapping (VRAM) in addressing the recommendations of the Joint External Evaluation (JEE) of the International Health Regulations (IHR) and therefore enhancing preparedness and response capacities to all hazards with impact to the health sector. He indicated that lack of resilience to disasters exacerbates the impacts of the disaster. He further stated that Namibia has inadequate capacities in disaster management systems, hence the need for the VRAM exercise. The outcome of the VRAM will inform actions to strengthen capacities for disaster risk management in the health sector and overall, contributed to disaster risk reduction.  He recognized the institutions present and thanked the WHO for the financial and technical support provided to Namibia to conduct the exercise.

Dr. Petrus Mhata made remarks on behalf of the WHO representative, Dr. Charles Sagoe-Moses. He noted that some disasters could have grave impacts on international trade and travel and impacts on the health sector as well as on the population and national development.  He emphasized the need for an integrated approach in addressing disasters and building resilience to ensure health security.  He informed the participants that the country had conducted the JEE and developed the National Action Plan for Health Security (NAPHS) in the country and the VRAM exercise will build on the recommendations of the JEE results.  The VRAM exercise he noted, would help characterize vulnerabilities and capacities for chosen hazards at sub-national level and results would be used in the development of an all hazard public health preparedness and response plan as well as contingency plans for specific hazards.  He expressed WHO’s commitment to the process and thanked colleagues from WHO regional office for availing themselves to support the country in the VRAM process.

The group then prioritized 11 hazards as the most significant for the health sector and which warrants a national response.   Amongst the eleven were the ongoing Hepatitis E virus outbreak, recurrent Crimean Congo Haemorrhagic Fever (CCHF), Cholera, pandemic influenza, Motor Vehicle Accidents, drought, flood, Ebola Virus Disease, Anthrax, Polio, and Measles.  The Ministry with partners committed to finalizing the process by end this year.

The workshop was attended by 29 participants from different sectors including the Ministry of Health and Social Services, the Office of the Prime Minister (OPM), the Ministry of Works and Transport, the disaster management department of the City of Windhoek, the Namibia Statistics Agency (NSA), the Ministry of Defense, National Institute of Pathology, Namibian Red Cross Society among others. Participants included officers from the disciplines of epidemiology, infection prevention and control, research, emergency preparedness and response, animal health, and environmental health.