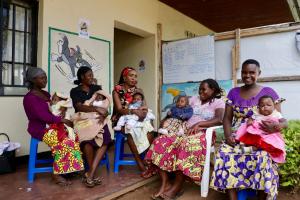 “I put my feet on the ground and wiggled my toes. It felt strange to touch the ground for the first time in weeks. Slowly, I stood up, holding the hand of the nurse. I held my swollen belly and smiled.” That was the moment Rachel Kahuko Kavugho began to let herself believe that she might survive Ebola “and that the baby in my belly might get to live”.

She is one of five women in Beni, in northern Democratic Republic of the Congo who have not only survived Ebola while pregnant but given birth to wriggling, screeching babies – welcome signs of survival.

Women are especially vulnerable to Ebola. According to data from the World Health Organization (WHO), women and girls aged 11 and older have been infected by Ebola at a higher rate than men and boys in the same age range.

The main reason for this, according to Dr Maurice Kakule Mutsunga, focal point for the WHO Ebola Survivors Programme in Beni, is that women are “primary caregivers within their families – especially for children and older persons – and often within the wider community”.

This extends to bringing children or sick relatives to hospital and staying with them there while they receive treatment. In many areas, women also continue providing care to sick relatives. It is, again, women who are usually in charge of funeral arrangements, including preparing the body for burial. These activities leave women at greater risk of exposure to Ebola.

For pregnant women, the risks are greater still. Once infected with the virus, they face higher mortality rates from Ebola than the general population. During the West Africa Ebola outbreak, the largest to date, few pregnant women or their unborn foetuses survived. Now, because of access to an Ebola vaccine, new therapeutic treatments and improved detection systems, more and more pregnant women are recovering from Ebola and delivering their babies.

“When my results came back positive, I thought I would die,” says Uleda Kisenye Kahambu, another of the five mothers who survived Ebola. “Even after I was cured, I worried every day for the rest of my pregnancy that my baby would die.”

Today, three months after giving birth, both Kahambu and her baby, Merdi, are doing well. Pregnant Ebola survivors in Beni are invited to come and stay in a special facility built for new mothers and babies next to the Ebola treatment centre a month before their due date, a practice borrowed from a public health strategy to limit maternal mortality generally. This helps doctors monitor them closely. When they go into labour, they are brought to the treatment centre, which means babies can be tested for Ebola straight after delivery.

Kavugho’s baby, Kakule, tested positive for Ebola soon after he was born. “I was scared,” she says, “but, having survived myself this time, I had more confidence. The doctors and the nurses treated him, and he got better very quickly.”

As well as testing the babies, health care workers, who have been trained by WHO, also test the mother’s breastmilk. While Kavugho’s breastmilk was found to contain traces of the Ebola virus, this is not always the case.  Kahambu and her friend Aimer Bikengya Kavira, another survivor and new mother, were both given the all clear to breastfeed.

“I miss breastfeeding,” says Kavugho. “I breastfed both my other children, so it feels strange to use a bottle.”

Being an Ebola survivor and a new mother comes with other challenges. The community can be reluctant to accept the baby, just as survivors are often treated with suspicion.

“Normally, when someone in our community has a new baby, everyone wants to hold it,” says Kavira. “But when I went home, no one wanted to hold my baby or come too close.”

“People thought if they held my baby, they would get Ebola,” agrees Kahambu.

Both women say their communities are slowly growing to accept their baby, in part because of awareness-raising activities conducted by WHO risk communication and community engagement teams. Negative experiences such as this nonetheless can have a lasting impact on the women.

Studies carried out on communities affected in the West Africa Ebola outbreak found that survivors still experienced symptoms of post-traumatic stress disorder, anxiety and depression long after the end of the outbreak. As well as medical follow-up provided by the Ministry of Health, with support from WHO and partners, survivors in the DRC also receive psychosocial care from health care workers trained by UNICEF and WHO. This aims to help them cope with what they have been through and other ongoing challenges.

“I lost my husband and my daughter to Ebola,” says Kavugho. “I have suffered a lot, but now I am so grateful I have my son. We are both Ebola survivors together.” 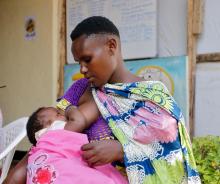