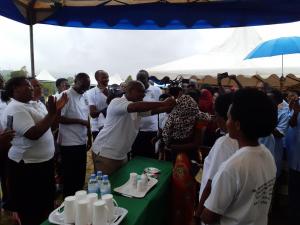 Rwanda organized its biannual Integrated Mother and Child Health Week from 14th to 18th October 2019. The Mother and Child week is organized twice a year and serves as an opportunity to scale up health services provision, particularly to the hard-to-reach, the unreached and the most vulnerable populations. The Ministry of Health in collaboration with Ministry of Local Government, Ministry of Gender and Family Promotion, Imbuto Foundation, WHO Country Office and other Partners is organizing a two months campaign called “The role of families in the Human Capital Development: Adhering to family planning and handwashing practices”. The campaign was launched in Karongi District, Western Province, on 14th October 2019 and was the first day of Mother and Child Health Week; the Guest of Honour was the Minister of State in the Ministry of Health, Dr Patrick Ndimubanzi. WHO Representative, Dr Kasonde Mwinga, represented UN Agencies in this ceremony. Among other guests were the Governor of Western Province, Mayor of Karongi District, United Nations Agencies representatives and other Partners.

In his speech, the Minister of State reminded the communities that the Mother and Child Health Weeks have improved lives of mothers and children by ensuring coverage of the basic health services for the communities. He urged communities for improvement on hand washing in order to prevent the main preventable diseases, especially among children. He also recalled communities to prevent malaria, fight against early pregnancy and increase family planning for a healthy development of the country.

WHO Representative, in her speech, congratulated the Government of Rwanda through the Ministry of Health and Partners for impactful interventions dedicated to mothers and children as the foundation of a healthy family. She recalled Rwanda successes in reaching MDGs targets on reduction of maternal and child deaths. She assured that WHO and entire UN family will continue to support the Government of Rwanda in its efforts to attain the SDGs targets.

Integrated Mother and Child Health Week is one of the strategy used to increase awareness regarding the use of preventive and curative services but also a great opportunity to provide key preventive services: deworming, vitamin A supplementation,  screening of cases with malnutrition, family planning services and messages for prevention of malaria, early pregnancy, malnutrition, hygiene and for adherence to vaccination.

In order to support the campaign, WHO provided deworming tablets which targeted around 5 millions of children aged from 1 to 15 years and technical support for the organization and supervision of the Mother and Child Health Week in Districts. 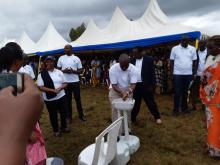