Mixing it with the Motards: understanding the needs and concerns of crucial community communicators 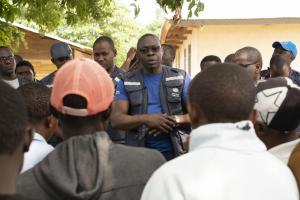 Mixing it with the Motards: understanding the needs and concerns of crucial community communicators

Alloya, a town serving a gold mining district in North Kivu is a town that understands trade and business. It is also a town with deep mistrust of Ebola responders. All too often, the belief that the Ebola response is about ‘business’ rather than saving lives, has taken hold.

In late June, cases of Ebola began to reappear in Alloya, following reintroduction of the virus by an infected person who avoided surveillance and travelled to the area from the then epicentre, Butembo.

On a hot morning in late June, WHO Ebola response leaders met the motard drivers of Alloya to listen to their ideas, beliefs and concerns about Ebola, to talk through what need to be done to protect the community, and to enlist their help as credible messengers.

“You are the people that carry the messages, the ones that people listen to and trust. Please help us bring the right information to people and save the lives of your families, friends and neighbours,” Dr Ibrahima Socé Fall, WHO Assistant Director General for Emergencies who is leading the WHO Ebola response in DRC, told the drivers gathered under the shade of a spreading tree.

In Alloya, as everywhere else in the North Kivu and Ituri provinces, motard drivers are the lifeblood of the communities they connect. Much more than simply a taxi service, the drivers carry messages, take people to hospital, bring goods, food and other essentials.

Above all they are people who are respected, listened to, and believed by their communities.

As the moto drivers talked, and asked their questions, it was clear many of those beliefs have taken root in the community. People still believe the sudden illness and loss of whole families was caused by poisoning, not Ebola, while others think it has been invented for political gain.