The Ministry of Health with support from WHO and partners vaccinated over 63 000 people with oral cholera vaccine in Bor South county, South Sudan 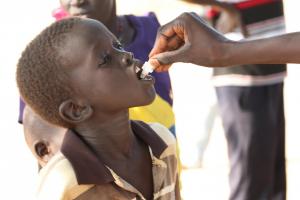 The Ministry of Health with support from WHO and partners vaccinated over 63 000 people with oral cholera vaccine in Bor South county, South Sudan

Juba, 22 December 2020 – to prevent the risk of a cholera outbreak following the devastating floods that displaced communities and led to contamination of water sources in Bor South county, the Ministry of Health with support from World Health Organization (WHO) and partners vaccinated over 63 280 individuals aged one year and above against cholera.

Following the floods which affected over 500 000 people in Bor South and other counties in Jonglei state during the last half of 2020, there was an increase in acute watery diarrhea cases that accounted for 12 per cent of total consultations. The trends were attributed to the congestion in the displacement sites, contamination of nearly 65 per cent of the safe water sources and the poor hygiene conditions both in the IDP sites and the towns.

As part of cholera prevention activities, an oral cholera vaccination campaign was conducted in Bor South county from 16 to 20 December 2020. During this first round of oral cholera vaccination, 88 per cent of the target population were reached with the vaccine. The second round is scheduled to start in the first week of January 2021 to ensure full protection from cholera for the next three years.

“Oral cholera vaccines along with improved access to safe water and sanitation and other interventions including reinforced messages on safe drinking water, hygiene, and sanitation are effective for cholera prevention”, said Dr Olushayo Olu, WHO Representative for South Sudan. “The cholera vaccine provides immediate protection to the vulnerable populations in the aftermath of flooding and before sustainable water, sanitation, and hygiene interventions are implemented”.

South Sudan has experienced several cholera outbreaks since gaining independence in July 2011. From 2014-2017 at least 28 676 cases and 644 deaths were reported in South Sudan. The recurrent outbreaks demonstrate the continued vulnerability of the population to the disease, which is preventable and treatable.

With financial support from GAVI, the Vaccine Alliance, a total of 71 852 doses of vaccines were secured for the first round to prevent the risk of cholera outbreak in high-risk areas of Bor county.

The preventive campaign has been conducted by Jonglei State Ministry of Health with support from WHO, UNICEF, and partners.

Cholera is a waterborne disease that is transmitted by eating food or drinking water that is contaminated with Vibrio cholerae, the bacteria that causes the disease. Cholera patients present with watery diarrhoea, vomiting, dehydration, abdominal pains and muscle cramps. Improving access to safe water, sanitation, and hygiene are core to cholera control. Safe and effective cholera vaccines are being used to complement the core cholera control interventions.