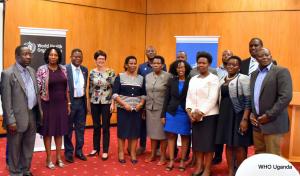 Kampala, 13th December 2018: - On 12th December 2018, the World Health Organization (WHO) and its member states commemorated the Universal Health Coverage (UHC) day. In Uganda, a high-level breakfast meeting was convened by the Ministry of Health (MoH) with support from WHO and other partners- Living Goods and PATH to engage parliamentarians on promoting UHC as a smart investment for the country and their role in achieving UHC through a multi-sectoral approach.

The theme for the day was “Multi-Sectoral collaboration towards universal health coverage, the role of parliamentarians”.

At the meeting participants highlighted the importance of achieving UHC, noting that it will improve health outcomes and ensure they are more equitable in Uganda. It was emphasized that achieving UHC is critical to achieving other Sustainable Development Goals (SDGs). For instance, it was observed that achieving UHC has economic benefits like reduced out-of-pocket expenditure on health which leads to reduced poverty levels among the people.

On their part, the members of parliament appreciated the Ministry of Health but called for more effort in ensuring health care services reach those who need them most. They pledged full support to advocate for a multi-sectoral approach to UHC committing to playing their role as UHC advocates.

The Ministry of Health is working with partners such as, WHO, World Bank and USAID to develop a roadmap that will guide Uganda’s path to UHC.

The WHO Representative in Uganda was represented by Dr Bayo Fatunmbi who said that UHC in Uganda is dependent on generating the political will to promote sufficient, sustainable and equitable investment in health and the social determinants of health.

He said, “All concerned stakeholders have a crucial role to facilitate monitoring and accountability to ensure that all sectors contribute to the health and ensure that the poor and vulnerable are covered so that no one is left behind.”

Referring to the Astana Declaration which Uganda is part of, Dr Fatunmbi emphasized that primary health care is the foundation for stronger and sustainable health systems required to achieve UHC. He also underscored the importance of strengthening health systems for UHC which makes them more resilient to unforeseen events such as the constant threat of disease outbreaks which is a reality in Uganda.

In her address to the parliamentarians, the Commissioner for Planning at MoH, Dr Sarah Byakika highlighted the critical role of other sectors in achieving UHC. She stated that MoH alone cannot lead the country to achieve UHC hence the need to work with other sectors such as education, water, works and transport, sanitation and agriculture. Dr Byakika called upon the MPs to prioritize health promotion in their constituencies to prevent the spread of disease among the population.

In his closing remarks, Hon. Keffa Kiwanuka, speaking on behalf of Dr Micheal Bukenya, the Chairperson of the Health Committee of Parliament, re-echoed the parliament's commitment to supporting UHC, noting that health is one of the issues that unite all the MPs across the political divide. 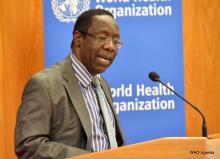