Monrovia, 27 August 2018: In an effort to improve maternal and neonatal care, particularly emergency obstetric and newborn care services in Liberia, a partnership operating under a memorandum of understanding between the Ministry of Health, World Health Organization (WHO), UNFPA, the Scottish Charity Maternal and Childhealth Advocacy International (MCAI) held a one meeting to appraise the current state of the maternal task sharing initiative being implemented. The project was seen as an innovative approach in improving obstetric care by means of task- sharing. The Project has two innovative programs, namely the obstetric clinician training program and the neonatal care clinician training program. Both programs involve midlevel cadres of health professionals, mainly midwives who are enrolled and trained to provide advanced obstetric and neonatal care at major hospitals around the country.
Liberia has one of the highest maternal mortality ratios, estimated at 1072/ 100,000 live births (LDHS 2013). In 2013, Ministry of Health, WHO, MCAI, UNFPA entered into a memorandum of understanding to implement an advanced obstetric clinician program aimed at improving hospital based maternal care, especially advanced obstetric care.  As a result of this memorandum of understanding, a pilot advanced obstetric care was rolled out enrolling the first two midwives at the C. B. Dunbar Maternity Hospital in collaboration with MOH, WHO and MCAI and the Liberia Medical and Dental Council in a regulatory role as well as the Liberia Board for Nursing and Midwifery (LBNM). In this project, Midwives were considered suitable because of their training in basic obstetrics and experience in identifying complications of pregnancy and delivery.
The project, now in its fifth year has been expanded to three other hospitals with two qualified clinicians trained by the project who are now providing services along with nine interns who have also completed two of the three years of training. Additionally, the project has enrolled since February 2018, ten new obstetric clinicians who are expected to be assigned upon completion. Though the project has made a number of strives, a number of challenges continue to surface. It was against this backdrop that    the Ministry of Health hosted a technical forum to review the progress of the programs and chart the way forward.  Participants to the forum included:  UNICEF, WHO, World Bank, Irish Embassy, the Liberia Medical and Dental Council, the Liberian Medical and Dental Association and the Liberia Board for Nursing and Midwifery.
Speaking during the opening of the meeting, Dr. Francis Kateh, Deputy Health Minister and Chief Medical Officer, Ministry of Health said the technical forum was important to listen to the trainers and project managers to know how far we have come,  the next steps and  to address challenges. He said, about six women died daily from maternal deaths around the country, a situation he said has now taken a human face and needs solution. He said though the government has instituted different strategies to reduce the number of maternal deaths, wondered why Liberia still has one of the highest maternal death burdens globally. Ending his remarks, Dr. kateh lauded all partners who have contributed to the achievements of the project.
Dr. Obed Dolo, Master Trainer and consultant to the Task-sharing program, Ministry of Health described the project as a significant approach  to the  reduction of maternal deaths in Liberia and highlighted a few achievements of the project;  making specific reference to one of the trainees who is in his final year and is based in the south eastern region. According to Dr. Dolo, this trainee has conducted 14 out of 23 cesarean sections independently including other maternal emergencies. Other benefits highlighted by Dr. Dolo include: leading ward rounds when Doctors are occupied, undertake essential procedures i.e.; insertion of balloon tamponade in managing post-partum hemorrhage, perform instrumental deliveries, perform cesarean sections,  undertake skills transfer and provide mentorship to junior doctors in training or internship and served as onsite tutors for nursing and midwifery students. He also stated that, to ensure safe and quality obstetric and neonatal care in all hospitals in which trainees are based,  the project also provides support to the health system through the refurbishment of surgical theatres, labor and delivery wards, neonatal units and the provision of necessary equipment and  medical and surgical supplies.
Making remarks, Dr. Mesfin G. Zeblo, Officer in Charge, WHO-Liberia commended the MOH and the Liberia Medical and Dental Council for making maternal and child health a priority. He said mothers are dying from preventing conditions and 40% of mothers are at risk of maternal complications which requires surgical intervention at the primary referral care level.  Dr. Zeblo also indicated that the decision to prioritize midwives for the Task-sharing projects will help in reduction of number of maternal deaths because midwives are present in all parts of the country and are rooted within the communities including those with the least number of doctors. He pledged WHO continuous support; both technical and financial to the project.
For her part, Dr. Anju Puri, UNICEF’s Child Survival and Development Specialist, commented that Doctors alone cannot contribute to the reduction in maternal and neonatal death rates. She said unless we work with the communities and the primary health care system, the desired 40% reduction will not be achieved.
Following a careful review of the project, it was considered that the project has made a number of strives in partnership with the Ministry of Health and others in the reduction of maternal and neonatal mortality and therefore there is a need for the continuation of the project activities. The Ministry of Health then requested all partners (WHO, UNFPA, MCAI and the Advanced Life Support Group, UK etc.) to continue the technical and financial support to the project. 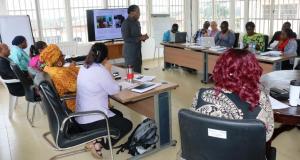