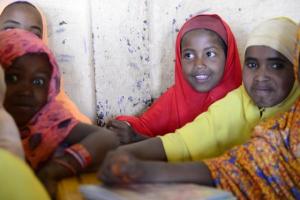 Fifteen years ago the world united around a common agenda to tackle poverty. This agenda is what we know as the Millennium Development Goals (MDGs); it committed global leadership to a new partnership to reduce extreme poverty and set out a series of time-bound targets with a deadline of 2015.

As the MDG end date approaches, it is time to reflect in what was achieved during the past years spent on pursuing the MDG targets.

Ethiopia has made remarkable progress in achieving all the health related MDGs, especially during the past ten years.

MDG 4 on child survival was achieved three years ahead of target date. By 2012, the number of child deaths had dropped 67% from one of the highest mortality rates in Africa.

Maternal mortality has also reduced about 70%. All other MDG 5 indicators except for increasing skilled birth attendance are on track.

Access to safe drinking water (MDG 7) has increased 57% compared to 1990. Although the sanitation target for MDG 7 has not yet been achieved, there has been great progress in improving sanitation and ending open defecation.

The availability of affordable essential medicines (MDG 8) has also increased rapidly in the country.

How did Ethiopia do it?

But how did Ethiopia manage to propel its health system to such success when many other African counties have not been able to do so?

The main lesson learnt from Ethiopia is that ambitious MDG targets can be achieved when the government and development partners have a common vision and work together to support initiatives aimed at improving the health of the people.

The Government of Ethiopia’s commitment and strong coordination of interventions across different ministries and departments, as well as the prioritization of MDGs in national strategies and plans, have been key components of the country’s success.

Community participation through the Health Development Army (HAD) and the Health Extension Programme (HEP) have empowered and mobilized people, especially women, to drive forward health initiatives in their communities.

Health sector partners have harmonized and aligned their efforts with Ethiopia’s national plan. This effective partnership for health has enabled strategic use of available resources towards a common agenda.

The job is not yet done

Although Ethiopia has recorded remarkable progress on MDGs, a number of challenges still remain. There is a need to step up efforts and place more focus on improving gender equality and women empowerment. That said Ethiopia’s policy and programmatic measures in the areas of gender mainstreaming and women’s empowerment have started to yield positive results.

Moreover, the number of people who die due to preventable and avoidable causes is still high compared to the global average. Neglected Tropical Diseases remain a challenge to the Ethiopian health sector compromising the quality of life and causing blindness, disfigurement, permanent disability and death, particularly among the poor. Non-communicable diseases are also a growing burden, accounting for 30% of deaths in Ethiopia in 2014.

The World Health Organization (WHO) has been supporting Ethiopia in its efforts to improve the health of the people since 1956. It provides technical and financial support to strengthen the capacity of the country’s health system.

The WHO country office for Ethiopia staff works closely with the Federal Ministry of Health (FMoH) in developing and adopting health guidelines, norms and standards, as well as in adopting and scaling up evidence-based interventions. The Organization is also a key partner in disease surveillance activities and supports collection and analysis of health data.

In the post-2015 world our common goal will be to achieve universal health coverage. This will require further strengthening of the health system with strong focus on equity and quality. These are priorities for the Federal Ministry of Health and WHO stands ready to support this process.