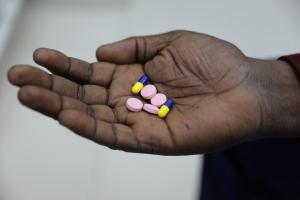 Bangui/Brazzaville/Yaoundé – A major donation of azithromycin, an antibiotic, is being delivered to Cameroon, Central African Republic and the Republic of Congo to contribute to the ongoing efforts to eradicate yaws in the three countries that are among nine in Africa where the disfiguring and debilitating childhood infectious disease is still endemic.

Brazilian pharmaceutical firm, EMS, is on track to supply the three Congo Basin countries with 6 million tablets of the oral antibiotic. Central African Republic and Congo have received shipments of the antibiotics. Cameroon is set to receive their supplies in the coming weeks. Around 1.4 million people at risk of yaws in the three countries will receive the drugs in the initial round of a large-scale administration. Further rounds are planned to reach all the 7.4 million people at risk in the three countries. A single dose of azithromycin can completely cure yaws.

“Although yaws can be debilitating, especially among children, it is curable through inexpensive and effective antibiotics that have the potential to accelerate its eradication,” said Dr Matshidiso Moeti, World Health Organization (WHO) Regional Director for Africa. “This important donation gives a new push to the efforts aimed at ending yaws in our region. Thanks to the generosity of donors, future generations of the Congo Basin countries can live free of the suffering caused by this easily treatable illness.”

In partnership with (WHO), EMS is donating 153 million tablets to the global campaign to eradicate yaws. The initial agreement is from 2017—2022 but efforts are underway to extend it.

“At EMS we are proud to be part of this global yaws campaign. We’re glad that our collaboration with WHO is supporting the global momentum to achieve universal health coverage and the 2030 roadmap to eliminate neglected tropical diseases,” said Carlos Sanchez, Charmain of EMS Group.

The project in the three Congo Basin countries is financed by the German Development Bank (KfW) through the Central African Endemic Control Coordination Organization and FAIRMED, a Swiss-based non-governmental organization, is overseeing the implementation. The project also combines yaws eradication activities with integrated surveillance of leprosy, Buruli ulcer and response to other neglected tropical diseases in the targeted countries.

To help implement and monitor the yaws eradication strategy, WHO has provided key technical guidance documents, standardized data collection tools as well as facilitated the supply of azithromycin to the affected countries. The Organization is also actively engaged in advocacy, partnership and resource mobilization to support countries.

Yaws is part of a group of bacterial infections commonly known as the endemic treponematoses. The disease tends to afflict vulnerable children in Africa, Asia and Pacific countries. It is spread from person-to-person. Poverty, low socioeconomic conditions and poor personal hygiene facilitate its spread. Without treatment, yaws can lead to chronic disfigurement and disability. The discovery of penicillin in the 1940s changed the way yaws was treated – a single injection led to cure. The disease burden dropped by 95% following the 1952 and the 1964 global eradication campaigns led by WHO and UNICEF. Unfortunately, because of lack of surveillance, persistent poverty and lack of access to health care, pockets of yaws exist even today.

Today, there are modern tools that will make the eradication efforts easier.

With the discovery in 2012 that a single dose of oral azithromycin is effective against yaws, WHO published an eradication strategy based on the use of the antibiotic. A recent study shows that at least three rounds of mass treatment given at 6-monthly intervals substantially reduces the burden of yaws. This discovery meant that treatment of entire affected populations was possible. More importantly, it overcame the cumbersome logistics and the need for injections, which require administration by trained health-care workers.

However, azithromycin has remained out of reach of those most vulnerable to the disease due to cost. The availability of the drug through WHO and EMS partnership will ensure that all the populations at-risk have access to effective treatment.

Second, there are improvements in diagnostics. Simple rapid tests are now available to confirm yaws under field conditions, but cost has limited their widespread use. Reference laboratories in the affected countries are being strengthened to monitor any emergence of resistance to azithromycin using molecular methods.

The main challenge remains access to the rapid diagnostics and funding for implementation.

Extent of yaws in Africa

Globally, there are 15 endemic countries in Africa, Asia and western Pacific region.

Of the 47 countries in the WHO African Region, nine are currently endemic: Benin, Cameroon, Central African Republic, Congo, Côte d’Ivoire, Democratic Republic of the Congo, Ghana, Liberia and Togo.

Twenty-six countries are considered previously endemic based on the 1950s campaigns, while 12 have no history of yaws.