Looking out for Acute Watery Diarrhoea in Somali region: A day in the life of a World Health Organization (WHO) surveillance officer in Ethiopia’s Somali region

Kifa Bashir is a WHO Disease Surveillance Officer assigned to Faffan zone in Somali Region in Ethiopia. Today, she is visiting Koloji in Babile district, the largest camp for internally displaced people in the area.

Located 57 kilometres from Jigjiga town, Koloji provides shelter to 30,000 people; it had been reporting cases of acute watery diarrhoea from March-June 2017.

This particular visit is special for Kifa because, alongside her routine disease surveillance work, she will visit a community that has been affected by the outbreak.

Koloji clinic is run by two health officers and staffed by 14 nurses, three health extension workers and a pharmacist. It is supported by a mobile Health and Nutrition team operating in the area.

Kifa enquires about any new admissions to the clinic that may have taken place overnight. As there were none, she marks ‘nil’ in her records. She then checks that there are enough supplies to handle a resurgence of cases of acute watery diarrhoea. Kifa finds the existing stock and storage conditions satisfactory.

Afterwards, Kifa meets with community leaders and health workers to talk about how to control the outbreak in the camp and in surrounding host communities. They point out that the 1-to-5 network[1] is successfully advising families and individuals on how to protect themselves and seek treatment. Kifa recommends building more latrines and scaling up on going awareness raising activities.

After the meeting, Kifa enters the camp to engage with residents. About ninety people are already waiting for her under a tree when she arrives, women seated to the left and men to the right. There are mothers with children on their backs, children of all ages and young people.

After the customary round of greetings, Kifa unpacks her tools – a megaphone, jerry cans, soap, and water purifiers – and leads a discussion on acute watery diarrhoea prevention and control.

An interactive session ensues. Kifa listens carefully to what community members have to say about how the waterborne disease is impacting their lives. She answers all their questions, always leading the conversation back to the prevention and control measures that the community needs to adopt.

Her message is further reinforced by an enthusiastic man that appears to wield considerable influence in the community, who stands up, faces the audience and repeats what Kifa said with a loud and authoritative voice.

Visiting affected communities is a key element of sustained social mobilization and is crucial to effective outbreak prevention and response. WHO surveillance officers regularly visit communities and health facilities to verify rumours, and to identify and investigate cases.

WHO and partners are supporting government efforts to bring Ethiopia’s acute watery diarrhoea outbreak under control. WHO provides technical experts, supplies and logistical support to assist the Ethiopian health authorities with case management, infection prevention and control, and water, sanitation and Hygeine.

In 2017, WHO has deployed up to 120 staff members to Somali Region to support the response to acute watery diarrhoea, as well as provided kits containing oral rehydration salts, intravenous fluids and essential drugs. WHO has also established a sub-regional office in Somali Region to strengthen health cluster coordination.

[1] The 1-to-5 network is an arrangement across the country whereby five persons are coordinated under one leader in an informal mechanism for the upward and downward transmission of health and other developmental messages. 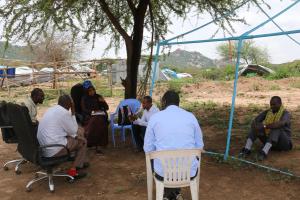