Monrovia, 8 December 2015 - Liberia is introducing electronic reporting which will enable faster detection of disease outbreaks. Learning from experience gained during the 2014 Ebola outbreak, the country is beginning to use mobile technology to help health-care workers detect and communicate potential public health threats in a timely manner.

The technology, the electronic Disease Early Warning System (eDEWS), is based on a mobile application. It enables health workers to report in real time public health threats such as acute watery diarrhoea, polio (AFP), measles, meningitis, and viral haemorrhagic fevers, including Ebola.

Through eDEWS, data are collected using software installed on smart phones, tablets or laptops, then immediately sent to a central location for analysis. With faster reporting, increases in numbers of patients with diseases of public health concern can be spotted more quickly, enabling prompt follow-up action.

Thomas Nagbe, Director of the Disease Prevention and Control Department, Ministry of Health and Social Welfare: “Through eDEWS, teams will be able to report from district, county and national levels.” eDEWs will be used to strengthen the Integrated Disease Surveillance and Response (IDSR) system which is used nationwide.

In the preliminary phase, eDEWs will be introduced in 75 health-care facilities in the counties of Montserrado, Grand Bassa, Bomi, and Gbarpolu.

Preparations for the roll-out started with a 2-day training organized by the Ministry of Health and Social Welfare, with support from WHO, at the end of October. During the training, health-care workers received hands-on training on data management and validation, GIS mapping and alert and outbreak management.

Mr Mike Mulbah, Acting Director of Monitoring and Evaluation at the Ministry of Health and Social Welfare: “eDEWs will go a long way in improving the capacity for surveillance in the country and is very much in line with the country’s Investment Plan for Building a Resilient Health System. He added: “The beauty of eDEWS is that it is an initiative developed with local input, and so takes into account the realities of the local context.”

WHO Country Representative Dr Alex Gasasira: “The introduction of eDEWs shows Liberia’s commitment to strengthening integrated disease surveillance which is one of the core capacities of the International Health Regulations (2005), is most commendable.” He reiterated WHO’s commitment to supporting implementation of the system and more generally to strengthening IDSR.

WHO has provided six sets of telecommunication equipment consisting of tablets, smart phones, satellite phone sleeves and laptops pre-loaded with the eDEWS software to the counties participating in the initial phase of introduction.

An evaluation of this first phase will be undertaken after 12 weeks of implementation to assess effectiveness and operability in the Liberian context. Lessons learnt will be incorporated into the next phase of implementation. It is expected that the technology will be used countrywide by the end of 2016. 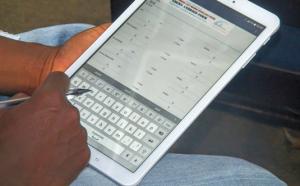