Lessening bilharzia and worms burden during the COVID- 19 Pandemic – The story of Gache Gache Village. 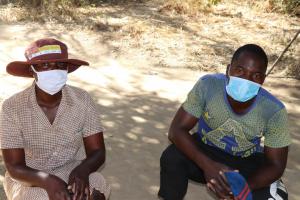 Lessening bilharzia and worms burden during the COVID- 19 Pandemic – The story of Gache Gache Village.

- Gache Gache is a village located in Kariba, a fishing town 356 km from Zimbabwe’s capital, Harare. Accessing this small remote village is no easy task.  One has to drive 97km from Kariba Town on a dusty and peddle stoned road. The terrain is unforgiving- extremely rough and mountainous- on the three-hour journey to this village. During the heavy rain season, Gache Gache village cannot be reached as the small bridges flood. Accessibility problems make Gache Gache an extremely marginalised community which struggles to access health care services.

Yet, the Ministry of Health and Child Care (MoHCC) with technical support and medicine from WHO Zimbabwe managed to reach this remote community in order to conduct Mass Drug Administration (MDAs) targeted at bilharzia (schistosomiasis) and intestinal worms (soil transmitted helminths). Higherlife Foundation also supported MoHCC through resources which funded activities such as  capacity building and  implementation of the MDAs. The campaign was led by the MoHCC as part of control of Neglected Tropical Diseases (NTDs) in Zimbabwe. Gache Gache, a small impoverished community is one of the areas in the country with a significant burden of NTDs.

In this small and almost forgotten village l meet Mathias Nziramasarira a 28-year-old young fisherman. A village health worker (VHW) Muchaneta Samu has just told Nziramasarira that he has bilharzia. Muchaneta, who has stayed in this village for 20 years explains the grim situation of bilharzia and intestinal worms cases. She has been overburdened with reporting numerous cases of people who have experienced abdominal pain, diarrhoea, and blood in the stool -which are all symptoms of bilharzia to her local clinic. “For as long as l can remember, the people in my community have always suffered from bilharzia. The children always had worms. This does not surprise me because most of them are always fishing in contaminated water bodies without any shoes,” says Muchaneta.

Additionally, Muchaneta notes how poor sanitation and lack of access to safe drinking water is another reason why Gache Gache is over burdened with so many cases of bilharzia and intestinal worms. “We only have five working toilets shared amongst 26 households in Gache Gache and not a single borehole. We all drink water from the dam which we all know is contaminated,” adds Muchaneta. Bilharzia and intestinal worms continue to persist in conditions of poverty.

MoHCC carried out MDAs under the National Treatment Campaign for bilharzia and intestinal worms in June. The aim of administering MDAs is to treat everyone as if they are infected. This helps to completely end the cycle of infection and contribute to the elimination of NTDs. Previously MDAs were conducted at schools and local clinics. Because of the national lockdown and travel restrictions as a result of COVID-19, some people cannot travel to the health facilities. As a result, the MoHCC took the service to the people, WHO, in addition to providing technical support, also assisted with transport for the nurses and drugs from Gache Gache clinic to a central point, Gache Gache irrigation. Here, the drugs were distributed directly to the community.  The transport provided by WHO assisted the nurses from Gache Gache clinic reducing  the burden of walking 12km to reach community in Gache Gache irrigation .

As soon as the WHO vehicle arrives, Muchaneta rings a bell, a signal for the community to come to the gathering spot. As each community member arrives, the nurses conduct COVID-19 pre-screening. The process involves checking temperatures, washing hands, sanitising them and maintaining social distancing throughout.  As the drugs are being distributed, MoHCC officials remind people to stay safe and take precaution with regards to COVID-19.  Each individual leaves the premises as soon as he or she gets medication to avoid social gathering. WHO also takes the opportunity to observe communities’ adherence to Zimbabwe’s laws on COVID-19 hygiene and etiquette.

Nziramasarira (mentioned above) was part of the many villagers who received praziquantel, albendazole and mebendazole which are bilharzia and intestinal worms’ treatments. He had only stayed in Gache Gache for two months when he met Muchaneta during a health promotion meeting on bilharzia and intestinal worms.  Following the meeting, Nziramasarira and many others told Muchaneta that they had experienced the symptoms of bilharzia she had described.  “I moved to Gache Gache from Bikita two months ago and l began to see blood every time I urinated. l had no idea what that meant until l attended the health promotion session on bilharzia and intestinal worms. As soon as the meeting ended, l immediately told Muchaneta that l am experiencing the symptoms she described. She immediately wrote my name down and told me l would receive treatment on Saturday,” says Nziramasarira. He is overjoyed and describes himself as a lucky man since he got the treatment before Saturday.  “Like l said before, l am a fisherman who is always in the water and exposed to contracting worms and bilharzia so l am really glad l got this medication which will treat me.” He adds: “l was worried seeing blood every time l urinated. Most importantly l will no longer have to stop fishing because that’s how l earn my living.” Nziramasarira has a huge smile on his face as he stands next to Muchaneta his VHW.  To Nziramasarira, Muchaneta is a hero. She educated and helped him know that he had bilharzia.

Thanks to support from Expanded Special Project for Elimination of NTDs (ESPEN) project in WHO Afro which pools funds from donors to support countries in the control and elimination of NTDs people like Nziramasarira and the rest of his community were able to receive praziquantel, albendazole and mebendazole treatment which will help decrease the burden of bilharzia and intestinal worms.  Gache Gache, Kariba was one of the targeted wards under the two main provinces Mashonaland West (Kariba) and Mashonaland Central (Mbire) to receive MDAs against NTDs under the National Treatment Campaign for Bilharzia and intestinal worms.  These two provinces’ MDAs were necessitated by the recent reported outbreaks and increased cases of Schistosomiasis (SCH) and Soil Transmitted Helminths (STH) complications amongst the populations.  In addition, the MoHCC Impact Assessment of six years (2012-2017) of school based MDAs for SCH and STH indicated Mash West (Kariba) and Mash Central (Mbire) still had a high prevalence of SCH and STH.