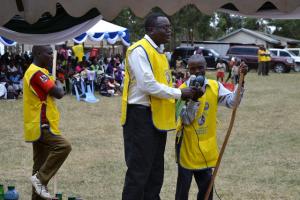 The launch for the Polio Second Round campaign in Kenya kicked off this weekend with a passionate appeal to parents and care-givers to open their doors for Polio teams so children could be vaccinated.

Speakers who included four Polio survivors appealed to caregivers not to take any chance with their children’s life given how devastating polio could be. Among them was Senator Harold Kipchumba, the Immunization Goodwill ambassador.

“Don’t even hesitate about this vaccination because polio is real and the consequences cannot be reversed, David Otieno, 34, appealed.

People point at many false causes of polio including inheritance, he added. “I want to tell you, it is none that. Polio is preventable if you take action,” the father of five who contracted polio at age five said.

His message was further reinforced by Omollo Maurice,19, who  also asked parents  not to take polio lightly.

“If I could be cured, they would have done it in the past 19 years,” he said, stirring the crowd into appreciation.

He said polio had denied him  the joy of growing up with peers and friends and even as a high school student, he still suffers because his mobility is hampered and he has to use a stick to walk long distances to school.

“Polio dehumanizes, cripples, undignifies and it is painful,” he said. He called on everyone to prioritize immunization stating it is not a choice but ‘our responsibility,” he said

The national launch attended by hundreds of people from within Migori, health officials from both national and County government, UN agencies  and other partners marked the beginning of the five-day campaign.

The Second Round covers 11 of the 32 counties where campaigns were done between August 1-5.

Dr  Pacifica Onyancha, MOH, who represented and read the remarks of the director of Medical Services Dr Nicholas  Muraguri  said  a risk analysis done in January had shown that  66 per cent of  Kenyan children  faced  moderate to high risk exposure to the disease.

Dr Onyancha, head of Standards at MOH, emphasized the vaccines were safe and called on the communities and caregivers to ensure the targeted 1.8 children were reached.

Further she said Round One of the campaign help early August had shown great success with 80 percent of the participating 32 counties having achieved over 95 per cent of polio coverage.

She said the 11 counties were at high risk because of higher risk of exposure to the polio virus due to various mitigating factors among them low immunization coverage/health indicators, border threats of neighboring countries.

“It is pertinent to note that as long as polio circulates anywhere in the world, it is essential for Kenyan children to be protected from this disease. There are still gaps in the region that need to be closed in surveillance sensitivity in high risk areas, improvement of routine immunization, population immunity and undetected low level polio transmission in all other countries of the region.

She said the national launch and campaign was also part of the effort towards the Global Polio Endgame Strategic Plan to eradicate polio from the face of the earth by 2018. “So far four WHO regions have been declared polio-free. Africa and East Mediterranean regions are not yet free,“ she said.

Kenya has made remarkable progress in the polio eradication effort through the many rounds of polio vaccination that we have done in the past two years. The last case of imported Wild Polio Virus (WPV) was detected 2 years ago. Nobody has the right to reverse our gains! I said NOBODY!

She expressed optimism at the fact that Nigeria, the only polio endemic country in Africa had  remained free of polio contamination for one year.

“We want to keep this momentum so our continent can be completely free of poliomyelitis. But we have to play our part by strengthening our children’s immunity through Routine Immunization, continuous surveillance and supplementary immunizations activities like the one we are launching today,” she emphasized

Deputy Governor Hon Nelson Mahanga called on fellow to help build the immunity of their children. He also called for support and appreciation of the devolved health by all citizens adding that there was need to provide health services to mwananchi, who  voted for the devolved health. The country had no national or  county patients, he said  and called for  structures and planning that had Kenyans at heart and mind.