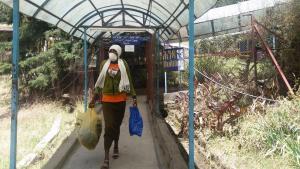 “My name is Kitaw Teklemariam. My daughter was only two years old while I was diagnosed as a TB patient at the age of 40. The problem I had been dealing with was not only my health; I was also confronted by the stigma from my family and the community. That touched me very deeply. Thank you I am alive now because of the affordable care I found in the country and the improved management of Drug Resistant Tuberculosis (DR TB) cases that provided me a good quality of care to save my life. I am grateful for doing the sensitization in different regions by sharing my story as a survival and promoting the TB program that benefits TB patients and the communities with little cognizance.

Worldwide, in 2017, 558 000 people developed TB that was resistant to Rifampicin (RR-TB), the most effective first-line drug, and of these, 82% had multidrug resistant TB (MDR-TB). Among cases of MDR-TB in 2017, 8.5% were estimated to have extensively drug-resistant TB (XDR-TB).  The national TB program in Ethiopia provides care for MDR and XDR TB patients. The number of people dying of MDR TB was high previously but by the time Kitaw was diagnosed, there was an improved program capacity that saved many lives.

Kitaw was first diagnosed as a MDR TB Patient in 2015. Kitaw shares his experience that he was having very little knowledge about TB particularly on DR. ‘The symptom I had first was a cough and I have never expected that will be TB. So, I was treating myself with common cold traditional medicines. After two months passed, it was diagnosed as TB but again it was not confirmed as DR TB.  I started treatment with the first line drug-Rifampicine but I did notnot respond to this treatment and I become weak. Further investigations were made  and finally I was diagnosed as having DR TB. So I was obliged  to start the treatment again with new medicine. It was frustrating to me to be diagnosed with DR TB and initially I lost my hope since I thought my life was ending but with the encouragement from my wife, I started taking the medicine that helped me to survive’.

It was too late for him to retrieve his customers back to continue working as an electrician after he was forced to stay away from his job while he was undergoing with his treatment. Though he faced many challenges, Kitaw didn’t stop his medicine until he finished and finally his result became and continue to be negative. One and half years have passed now after Kitaw started to work as  a CEO in Organic Health Care service Ethiopian Residence Charity which helped him to cover his living cost. This helped him to continue his life substituting his previous business where he was used to work as an electrician.

The government of Ethiopia in collaboration with partners continued to accelerate its effort to fight against TB through case surveillance, prevention and provision of quality care for patients. In 2018 alone, a total of 741 patients confirmed to have DR-TB and all of them have been started on treatment.

Dr Daniel Meressa is a clinician internist at St Peter’s Hospital for Coordination of the MDRTB treatment program and clinical management of patients. Dr Daniel speaking about the program said that “There are committed health workers and program managers as well as committed international consultants and partner organizations that closely support the program. Dr Daniel also suggested the need to  strengthen the program focusing on active case finding and systematic screening of high-risk populations as well as the Psychosocial support for patients

World Health Organization, as a key strategic partner for MOH, is supporting the government through provision of technical support. WHO provides this technical assistance to strengthen the national TB, TBHIV and MDR TB program including TB prevalence surveys and data analysis, Anti TB drug resistance surveillance and support its quality through adopting standard WHO protocols, facilitating trainings to build the capacity of TB program managers and TB Laboratory staffs, and conducting program monitoring field visits. The TB and DR TB strategic plan for 2015-2020 and the national guidelines were revised in line with the latest WHO recommendations.