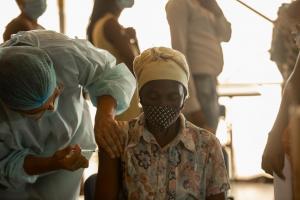 Luanda - The Paz Flor mall is usually packed with shoppers browsing for bargains or sitting down to enjoy a meal, but as Angola’s rollout of COVID-19 vaccines ramps up, the vibrant space in the nation’s capital has been converted to serve up life-saving vaccines.

Paz Flor is one of 21 major vaccination hubs spread across Angola’s 18 provinces that bring crucial COVID-19 vaccination services seamlessly together under one roof.

“My experience was good, very good, and I feel more protected now,” says Job Manuel, who just received his second dose of the Oxford-AstraZeneca vaccine. “There were crowds outside, but in here everything works really well.”

“The system starts with registration, then screening and vaccination. We also have a control area in case of adverse effects,” says Dr Silvia Lutucuta, Angola’s Minister of Health.

“We all work together in an integrated way, whether we’re from public health, security or the police. People can move from entry to resting after vaccination in just 20 minutes.”

by showing QR codes or SMS or email confirmations on their phones or print outs.

With all information logged online, the system also makes it easier to track preparation for second doses and to monitor and respond to any safety issues among the population.

Angola’s efforts to list the country’s priority populations for vaccination have won plaudits internationally, and like a number of other African countries, good ‘pre-listing’ has been crucial to an efficient first-phase rollout of COVID-19 vaccines.

“The innovative registration system allows for the real-time monitoring of all that is happening. It also helps significantly boost vaccination rates in large population centres,” notes Dr Djamila Cabral, WHO Representative in Angola.

Angola is making use of the Oxford-AstraZeneca, Pfizer-BionTech and Sinopharm COVID-19 vaccines, and has invested heavily in cold chain capacity so all vaccines can be used.

In a unique development among African countries, Angola worked with a local NGO to deploy 60 counsellors and community mobilizers Paz Flor and around Luanda.

“Dealing with the public is not always easy. Some are serious and some are more relaxed,” says counsellor Jenusa Abel, who helps ease doubts among the public at Paz Flor.

“The work I do is important because people need to leave here well informed, so when they get home, they know what to do if there are any adverse reactions.”

“It’s super good, it’s what I enjoy, not just passing on information but having a conversation. I'm learning a lot from the public here and I'm sharing whatever I can,” says Ms Jenusa.

“The commitment and energy from Angola’s government to get the vaccine rollout right was exemplary from very early on,” says Dr Djamila Cabral, WHO Representative in Angola.

“Good preparation, including around staffing and training needs, cold-chain logistics and getting the regulations right, were just some of the reasons why Angola was one of Africa’s first countries to receive vaccines.”

Angola has administered around 1.5 million doses so far, with over 1.3 million vaccines received through the COVAX facility.

WHO supports Angola’s COVID-19 response at all levels, has assisted with Angola’s vaccine roll-out readiness and deployment plans, and aids the rollout of vaccines in 14 provinces.

“The big challenge is vaccines, we urgently need more,” says Health Minister Dr Silvia Lutucuta. “Our teams are ready, we have the capacity. We need to vaccinate as quickly as possible to make sure the epidemiological situation does not get worse.”