Inoculating against the ‘infodemic’ in Africa 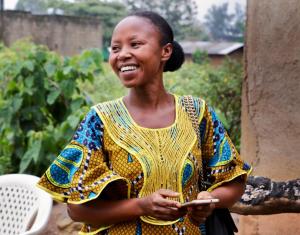 Inoculating against the ‘infodemic’ in Africa

Brazzaville – On entering Uganda’s Entebbe International Airport, visitors are greeted by posters on how to prevent COVID-19 transmission, even before having their temperatures taken by medical staff.  Video messages play in the departure and arrival lounges. So far, the number of people in Africa confirmed to have the virus is much smaller than other parts of the world. But as more health ministries in Africa have confirmed the presence of the virus in their countries, what was once a distant threat is now much closer.

Traditional methods of health risk communication have been put to good use in the African region. As well as using posters and video messaging at transit hubs and other points of entry, the Ugandan Ministry of Health and World Health Organization (WHO) in Uganda have countered the flow of misinformation with frequent radio interviews and televised press conferences. “The media are our partners and our major link to the public. We need to capitalize on our good relationship with them to inform the general public about COVID-19”, says Dr Yonas Tegegn Woldemariam, WHO Representative in Uganda.

In Nigeria, the confirmation of sub-Saharan Africa’s first case of COVID-19 on 28 February triggered a flurry of rumours about the origins and potential cures for the novel coronavirus. One viral WhatsApp message in Hausa even suggested drinking garlic-infused water and chewing raw garlic cloves, another that the virus originated inside rhino horn.

In the days following the announcement of Nigeria’s first case, WHO officials travelled to Ogun State, to reach out to concerned communities close to where the patient had worked.   “You can only imagine our relief when officials from the Ministry of Health and WHO visited to sensitize us on the risks and symptoms [of COVID-19], and how to protect ourselves.” said Chief Adisa Olaleye Joseph of Itori, a community leader.

As well as conducting a traditional campaign against misinformation, WHO recognized that tapping into online social networks is  crucial.  Staff in the WHO Uganda office made sure that key COVID-19 messages are shared online and scan social media each day to spot rumours and respond to questions from the public. In Nigeria, WHO staff have responded to rumours on social media and share WHO and Ministry of Health guidelines and resources.

Globally, WHO has partnered with Twitter, Facebook, Tencent and TikTok to try to ensure content on their respective platforms is accurate and helpful.  In January, WHO and Google joined forces to launch an SOS Alert on COVID-19.  Now, when people search for information on Coronavirus on Google, it is information from WHO’s SOS alert that appears at the top of the page. Videos on YouTube purporting to be useful updates on Coronavirus are framed by a banner redirecting users to the WHO web portal.  And if someone were to search for ‘coronavirus’ on Facebook, the first result directs web users to their national WHO office’s page.

Fighting fake news alongside WHO is the international press agency AFP.  The news agency has brought its fact-checking and information gathering expertise to bear on this global public health crisis, partnering with major tech firms along the way to help disprove viral stories circulating on the net.

While disinformation is a global phenomenon, the way it spreads can vary from country to country.  In Africa, news is often spread via WhatsApp groups or local radio, sometimes more than on Facebook or Twitter.  Traditional journalism skills are still extremely important for correspondents and stringers who monitor these WhatsApp groups and traditional media for outlandish or unverified stories.

Nina Lamparski, Chief Editor for AFP FactCheck, Africa, says that many of the rumours circulating on social media were about the origins of COVID-19, or claims that outbreaks had already occurred in various countries in Africa.  “You really need to go to people with solid medical knowledge to dispel some rumours,” Nina says. While some dubious messages concerned themselves with miracle cures or protection against the virus, others were more malicious: “It is very common to see overt racism around Chinese,” Nina continues.

“There is absolutely no rule of thumb as to what prompts a fact-check,” says Sophie Nicholson, Deputy Editor-in-Chief of Digital Verification at AFP.  Each case is considered in its local context: the shares needed for a post to be considered viral in Lesotho is going to be very different to Nigeria, and a humorous satirical news broadcast would not have the same potential for harm as a carefully doctored video that insights racial hatred against Chinese people.

Once a social media post has been fact-checked, Facebook will mark it as such in the Facebook newsfeed. If it marked as ‘false’ it will be downgraded by Facebook’s algorithm. When someone next attempts to share the post, the user is given a warning and directed to a fact-check page.  “There is an immediate impact on views,” says Julie Charpentrat, AFP’s health and environment fact-checking specialist. AFP also works with a tool to surface verified stories at the top of search results on Google and Bing.

The commitment to accuracy is a collective responsibility. This can be as simple as thinking before sharing, or flagging dubious stories.  “We do rely on people actively sending us what they find,” says AFP’s Nicholson.  In fact, AFP is launching WhatsApp numbers across Africa for people to ask questions, report fake news, or to ask for clarity on a story they have seen.

Often, says Nina, problems arise from the fact that politicians and ordinary people “don’t always think about what they share” and can occasionally “spread news unwittingly”. What we share, where we click and how we comment are all important: don’t feed the trolls.