Dr Owen Laws Kaluwa, the World Health Organisation (WHO) Country Representative, has called for improved funding for hepatitis testing and treatment services.
He noted that despite available diagnostic tools and effective treatment, less than one in ten of the 71 million people with hepatitis B and C in Africa had access to testing, and more than 200,000 die each year due to complications like end-stage liver cirrhosis and liver cancer.
Dr Kaluwa said in Ghana, access to hepatitis diagnostic services, WHO pre-qualified hepatitis vaccines and medication and treatment remained a major challenge.
He emphasized that funding hepatitis testing and treatment services as part of the Universal Health Coverage (UHC) was a cost effective investment, saying in Africa, two countries: Rwanda and Uganda, were providing free access to these services, and advocated that Ghana should do the same.
Dr Kaluwa made the call at a Ghana commemorative ceremony to mark the 2019 World Hepatitis Day, which was attended by the Deputy Minister for Health, Honourable Abban, Deputy Minister for Communications, Honourable George Andah and Directors from Ghana Health Service.
He also reiterated that the WHO urges all Member States to invest in a public health approach towards the elimination of viral hepatitis B and C in Africa, and these should include vaccination for all new-born and further integrate the interventions as part of health system strengthening
He said the theme for the year, “Invest in the Elimination of Hepatitis,” suggested that with increased investment and strong political commitment, the disease could be eliminated by 2030.
He said the WHO in June 2019, developed a new scorecard to track progress across the Africa Region, and the results included the fact that testing and treatment of the disease as a public health approach remained the most neglected aspect of the response.
Dr Kaluwa said it was also realised that the highest burden of the hepatitis B infection were among children less than five years old in countries without the hepatitis B birth-dose vaccination with suboptimal coverage (under 90 per cent) of childhood pentavalent vaccine.
He entreated the Ministry of Health and the Ghana Health Service to hasten the implementation of the introduction of the dose of Hepatitis B vaccine at birth.
These should include building on existing laboratory capacities for HIV and TB, embedding hepatitis surveillance in the national health information systems, and securing supplies of affordable medicines and diagnostics, he said.
Dr Kaluwa again said the WHO commends GAVI, the Vaccine Alliance, for supporting hepatitis B birth-dose vaccination and the Global Fund for also providing type C care for Persons receiving HIV therapy.
“In Ghana we may also wish to include support for Hepatitis Prevention and Control in our GAVI and Global Fund Programmes,” he added.
He said greater progress, was possible when countries invest in hepatitis testing and treatment services, and called on partners and pharmaceutical companies to reduce the cost of hepatitis B and C diagnostics and medicines.
He said together with the research community, “We can collectively explore ways to simplify testing and treatment, and promote innovation towards a cure for hepatitis B and a vaccine for hepatitis C”.
Mr Alexanda K. Abban, the Deputy Minister of Health, admitted that without a renewed financial and political commitment exhibited in a vigorous campaign to create the necessary awareness among the public, all efforts would not yield the desired results.
He said it was sad to observe that viral hepatitis B and C were the leading infectious disease killers, yet the majority of global leaders and public remained unaware, leading to the infection of 325 million people globally, and about 1.4  million deaths annually.
He said deaths from hepatitis have been increasing over the past decade, which points to the lack of global awareness and action among top decision-makers.
The government of Ghana would put in place measures to mobilise funds that would be dedicated to national hepatitis testing, Hepatitis B vaccination, and treatment plans.
The government will also make accessible and affordable quality diagnostics, medicines and vaccines to all those who needed them, and further work at investing in the introduction of “at birth dose vaccination” of all new-born to prevent infected mothers from transmitting the viruses to their babies.
He said the public has a huge role to play by encouraging all persons to get tested to know their statuses, seek knowledge on the risk and mode of exposure to Hepatitis B and C, so they could prevent themselves from getting infected.
He said vaccination for viral hepatitis for all children was free, and encouraged every Ghanaian to get tested, and get vaccinated if tested negative, but to seek early treatment from the nearest health facility if tested positive, avoid sharing sharp objects, use sterile and single-use syringes, practice safe sex with condoms and avoid multiple sexual partners.
The platform was also an opportunity to launch the national guidelines for Prevention, Care and Treatment of Viral Hepatitis.
Solidarity messages were presented by CSOs and Professional Associations working in the area of hepatitis.  As side attraction, free screening services were provided for the all participants of the function. 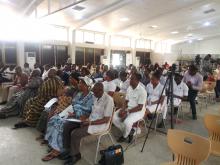 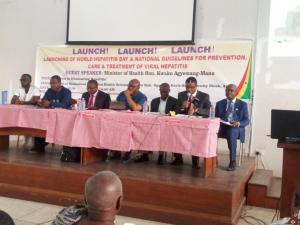