From 2- 7 December 2029, Kigali is hosting the 20th International Conference on AIDs and STIs in Africa. The theme for this year is “AIDS free Africa. Innovation, Community and Political Leadership”.

The Opening ceremony was chaired by the His Excellency Paul Kagame, President of the Republic of Rwanda in presence of His Excellency Felipe Jacinto Nyusi, President of Mozambique and took place on 2nd December. “ICASA exists to break down the taboos that impede prevention and early treatment. You are the ones to speak loudly and clearly. We have come too far in this struggle to do otherwise” said President Kagame at the opening ceremony.

ICASA is a major trilingual international AIDS conference (English, French and Portuguese) which is the largest gathering on HIV/AIDS on the African continent. ICASA brings together stakeholders in the HIV response including policymakers, academia, community leaders, activists, scientists and researchers, people living with the virus, pharmaceuticals, and the media, among others. The event represents a tremendous opportunity to highlight the diverse nature of the African region’s HIV epidemic and the unique response to it.

Strengthening the Healthcare Workforce and national Health Systems, strengthening Tuberculosis and HIV Integration, social and political sciences research, advocating for evidence-based Interventions, combating stigma, notably gender-based discrimination, and community trust is key to the success of the African continent.  Above all, strong leadership and good governance are the leading determinants for success.

The purpose of the conference is also to renew the engagement of the whole continent and all stakeholders in the SDG Framework, where sustainability of the response in reaching 90, 90, 90 extolled by UNAIDS will not be possible, if human rights do not become key priority for a new of African leadership. Countries in the West and Central African sub-regions are lagging behind and therefore would need a strong commitment to close the gap in HIV prevention, testing and treatment services but also promote integration and health for all. “ I congratulate the First Ladies in raising awareness on AIDS and STIs. As First Ladies, they provide exemplary leadership and compassion on many health agendas. We must all be together for a healthier Africa”, said Dr Tedros Adhanom Ghebreyesus WHO Director General.

"Dear sisters, as we reflect on our multifaceted roles in this journey to ensure that our communities fully thrive for better future, let us acknowledge what has worked and reveal what has not" said the Her Excellency Jeannette Kagame, First Lady of the Republic of Rwanda.

Ending the AIDS epidemic in the African Region will require rapid acceleration of the response over the next five years and then sustained action through to 2030 and beyond. This can only be achieved through renewed political commitment, additional resources, technical and programmatic innovations, and strengthening the application of science-based evidence.

Though there is a common understanding that there is a fundamental "Right to health" and that significant progress has been made in the African Region in the prevention and treatment of HIV/AIDS, the right to health for all is not being realized. Children are often missed out, key populations such as sex workers, men who have sex with men and injecting drug users are not being enough reached, and men are also often left behind. But above all, especially young women sadly continue to be at greater risk of HIV infection. 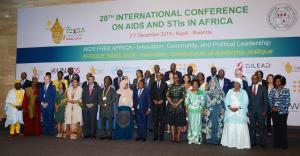