1 June 2017 - Today Sierra Leone kicked off bed net distributions to help protect its population against malaria, which remains one of the country’s most deadly diseases. In total, 4.3 million insecticide treated bed nets will be distributed through the landmark nationwide campaign.

At a national event in Makeni, Bombali District,  the initiative was launched by the country’s Vice President Victor Foh along with UN, NGOs and community partners. Aminata Bangura, who is the mother of a one year old child, was the first to receive one of the free bed nets.  She says she is pleased to receive the net, as she sees a vast number of children in her community getting sick from malaria.

“The free bed nets are very important to use everywhere in the country," she said. "Almost everyone here has been affected by malaria. The bed nets are essential because they will save women and their families from the terrible experience of losing a child.”

Sierra Leone is one of the most severely malaria-burdened nations in Africa, with its entire population of 7 million people at risk of the disease. The World Health Organization estimates that every year, malaria kills over 5000 children under 5 years of age in the country. It also contributes to life-threatening complications among pregnant women.

For these reasons, efforts to end maternal and child mortality will depend on winning the battle against malaria, and treated bed nets are undoubtedly one of the most effective tools for prevention.

For many people, the realities of malaria are all too real. Fatmata Kamara, 43, lost two of her children to the disease. She says that she will do everything in her power to protect the rest of her family and talk to people about the importance of using the net. “For me I will always make sure all of us are sleeping under the net all the time. The government and its partners are helping us with these nets, and we will also do our part so that we can keep our children alive.”

Putting the campaign into action

With support from partners, households will receive vouchers which they can exchange for the nets, and demonstrations will be given so that they are educated about their proper use and maintenance. Community engagement is also ongoing to encourage people to sleep under the nets every night, everywhere, and educate people on the health risks associated with the disease.

The campaign is being led by the Ministry of Health and Sanitation with support from UK aid, the Global Fund to Fight AIDS, TB and Malaria, the European Union, UNICEF and the World Health Organization. 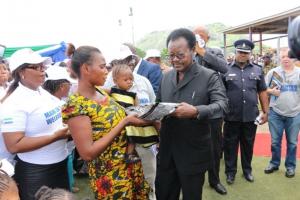