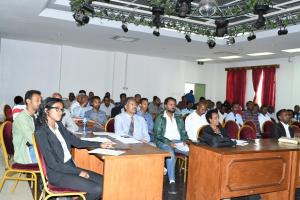 High level advocacy meeting on maternal perinatal death surveillance and response (MPDSR) institutionalizing in Eritrea has been held from 1 to 3 April 2019 at Orotta Conference Hall.

Director General of Health Services, Mr Berhane Gebretnsae officially opened the meeting and said that MPDSR is a process that allows you to identify and report all maternal and prenatal deaths. He stated some of the key challenges for not institutionalizing MPDSR so far. He also ascertained the participants that the motive of institutionalizing MPDSR in Eritrea is to auditing the system not individuals which will contribute largely in reducing maternal and perinatal preventable deaths. “If we introduce it into the all levels of the health system even at the community level, Eritrea will have proper documentation, attendance to the pregnant women and minimize preventable deaths” He emphasized.

WHO Representative to Eritrea, Dr Josephine Namboze reiterated that MPDSR has been recognized as a critical strategy to end preventable maternal deaths in countries including Eritrea. Dr Namboze said that perinatal mortality currently estimated to be 3.3 million still births occur every year and 4 million neonatal death, and that most of them die normally within 7 minutes of life. She added that looking at Eritrea, although it succeeded in reducing maternal and child mortality by 2015 and had achieved the MDG 4, and just fell short on the attainment of MDG 5, the country is moving forward to consolidate these achievements towards the SDGs target. She also underlined the need for multi-sectoral effort and assured the participants WHO’s continuous support.

During the meeting, Dr Nancy Kidula, WHO/IST/ESA said that in 2015, 880 women died as a result of pregnancy and childbirth in Eritrea. “Everybody has the right to life” she said. Since the deaths of mothers (maternal mortality) has such a devastating impact on society, families, development, economy and the social fabric, it is important for the country to have information that effectively guides actions to prevent these deaths - hence the need for MPDSR, she underscored. In addition, she said that there is a need to institute a conducive legal and policy environment to facilitate MDSR in Eritrea

Participants of the meeting were drawn from MOH, WHO, UNICEF, National Statistics Office, MOH from the six Regions. A short video was displayed at the meeting which showed why maternal and prenatal deaths occur.