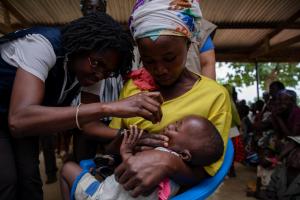 Following confirmation of circulating vaccine derived polio virus type 2 (cVDPV2) in the environmental sample from Tamale Metropolis and also detection of Polio in a two (2) years, (9) nine months old child from Chereponi district of the North East Region, the Ministry of Health /Ghana Health Service declared the event a Public Health Emergency of National Concern.  Again on 25th August 2019, the National Polio Laboratory further notified the Ghana Health Service of confirmation of Polio in environmental surveillance sample taken from a drain at Agbogbloshie in Accra Metropolis in the Greater Accra Region of Ghana. In response to these, a series of activities and actions were undertaken by the Ministry of Health/Ghana Health Service, WHO, UNICEF and CDC:
-  A multi-disciplinary/multi-sectoral national team was deployed to support the regional and district teams of the affected areas to carry out detailed investigations.
- A detailed risk assessment, coordinated by the EPI Team in the Country Office was prepared and presented to the mOPV2 Advisory Group for approval for mOPV2 Vaccination Campaign.

The round zero vaccination campaign in the 6 selected districts (Chereponi, Gushiegu, Saboba, Tamale, Sagnarigu and Bunkprugu Yunyoo) was conducted from  4 to 7 September 2019. The Regional Health Directorate conducted training for all implementing districts and subsequent downstream training for sub-districts was undertaken.  Logistics including vaccines, data collection tools and indelible markers were ably dispatched to the districts.  The campaign took off on the 4th of September with a launch in Ando Nyamadou, a community in the Chereponi District. Vaccination continued till 7th September and mop-ups were conducted for additional 2 days.
Generally, all the district teams reported very good social mobilization and awareness creation. This was mainly done through mobile vans, radio announcements and programs, announcements using PA systems in mosques and churches as well as market places and through town criers with loud speakers and house to house visits by volunteers, some of whom are from women’s groups.  Where people had been informed about the programme there was close collaboration between the community and the teams.  In households where people had no prior notification of the exercise, the presence of the volunteers was enough for them to bring their children out for dosing.  There was no incident of resistance due to religious or cultural reasons.  There was close collaboration between the Regional Health Directorate, the District Health Management Teams (DHMT), Health Workers, Volunteers, Local Government Administration. The Chereponi District Chief Executive (DCE) officially launched the polio vaccination campaign and went ahead to give the first dose to a little girl. He expressed strong commitment to the exercise and called on all caregivers to make their eligible children available for the vaccine.
Overall the campaign was well coordinated with optimum supervision by national, regional and district teams as well as Partners from WHO, UNICEF and CDC.