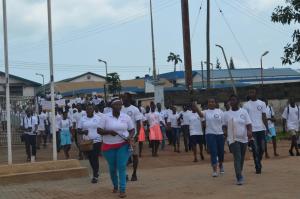 The government of Ghana joined the rest of the world in commemorating this year’s World Mental Health Day under the theme: “Mental Health in the Workplace”

A grand durbar was organised to crown the dual programs World Mental Health Day and Mental Health Week at Jubilee Park on Saturday 12th October 2017. The durbar was preceded by a float on the principal streets in the Takoradi town-ship by students from Tertiary and Senior High Schools.

Delivering the welcome address, the Deputy Western Regional Minister, Mrs Gifty Kusi mentioned that the theme for this year’s celebration was significant and timely. She indicated that employers were quick to kick out of their businesses employees who developed mental illness because of ignorance stigma and discrimination. Mrs Kusi therefore called on employers and organizations to create conducive environments for work so as to identify early warning signs of stress as a first step of controlling mental illness in the work place.

Dr Caroline Amissah Deputy Chief Executive Officer of the Mental Health Authority (MHA), in a keynote address said the day is set aside to draw attention to mental health issues, create the needed awareness and remind people that mental health problems are treatable.

“We can institute Employees Assistance Programme in our workplaces to allow easy access to persons who need help in that direction since a mentally friendly workplace is crucial for every business”, she said. Dr Amissah also mentioned that In Ghana, a conservative estimate of about 2.8 million people had a mental disorder of some sort and out of that, about 650,000 suffered a severe form of mental illness. She added that MHA had announced a silent revolution in mental health care and called on stakeholders to support the fight. She also called on organized labour to start defining best practices in promoting mental health in the workplace since without a mentally sound populace all social and economic interventions and achievements will be meaningless.

Dr Owen Kaluwa, Country Representative for WHO, said the lack of information, stigma and cultural issues continue to be significant barriers that prevented people from seeking help in Africa.

He said employers could become change agents by modifying risk factors for stress in the workplace, creating an organizational climate that promotes well-being and creativity as well as facilitate care for those in need. Dr Kaluwa said mental health was a priority on the WHO’s agenda, and that countries were encouraged to promote mental health in work places, build coalitions to promote best practices, decrease negative attitudes and empower individuals to promote good mental health for all. He added that workplace wellbeing was key to ensuring a healthy, sustainable workforce which was essential for a healthier, more productive and prosperous Ghana and Africa at large.