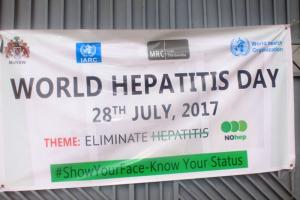 BANJUL, 8 August 2017: On 28 July 2017, the Ministry of Health and Social Welfare in collaboration with the World Health Organization (WHO), Medical Research Council (MRC) and other partners commemorated World Hepatitis Day under the theme: “Eliminate Hepatitis". To mark this important event a press briefing was organized for both the print and electronic media to raise awareness on this important but growing public health problem in the Gambia.

The Director for Health Services, Dr. Momodou Waggeh, presided over the launch on behalf of the Minister Hon. Saffie Lowe-Ceesay which took place at ActionAid Conference Room. He said that celebrating this event over the past couple of years is a further demonstration of his Ministry’s commitment to controlling hepatitis B in the general population bearing in mind that the Gambia was the test ground for the introduction of hepatitis B vaccination in routine immunization services. He thanked the Government of the Gambia for creating the enabling environment and partners like WHO and MRC for their support in ensuring that this Day is successfully commemorated in the Gambia.

Dr Waggeh also paid tribute to the WHO, MRC, GHIS (Gambia Hepatitis Intervention Study) as well as staff of his Ministry for spearheading the maiden commemoration of World Hepatitis Day in the Gambia. He pledged his Ministry’s fullest support to the hepatitis campaign as well as its commitment to working with partners in addressing this public health problem. He urged the organizing team to work closely with the health promotion directorate in ensuring that the general public is aware of hepatitis and how to reduce its public health burden in the Gambia.

“We need to work hard to ensure that the general public is safe from this illness”, he remarked”.

Dr. Sharmila Lareef-Jah, representing the WHO Representative a.i. Prof. Jean-Marie Dangou, used the occasion to highlight key messages in the Regional Director’s message on World Hepatitis Day 2017. She said that viral hepatitis is a serious but under-recognized global public health problem which needs an urgent response.

She noted that the first Global Hepatitis Report produced by the World Health Organization in 2017 confirms that an estimated 325 million people had lived with chronic hepatitis B virus (HBV) infection or hepatitis C virus infection at the end of 2015.

She said that that situation has even become more worrisome as most of adults chronically infected with hepatitis C in the Region are not aware of their infection and do not receive appropriate treatment.

Dr. Jah said that despite the challenges, there is hope to overcome this public health problem as widespread use of hepatitis B vaccine in infants has considerably reduced the incidence of new chronic HBV infections. Notwithstanding, other cost-effective measures are available to tackle the problem which include vaccination of health workers and at risk populations, ensuring safe blood supplies and safe transfusions, safe injection practices and safe sex with condoms as well as strengthening infection control practices in all health facilities.

“A safe and effective vaccine is widely available for the prevention of hepatitis B infection and has been introduced into routine childhood immunization schedules in all 47 Member States in the African Region with less than 40% of Gambian children yet to have received the three doses”, she lamented.

She said that because of the threat it poses to global public health and development, the 2030 Agenda for Sustainable Development calls on the international community to combat hepatitis through all-inclusive approaches that promote equity and universal health coverage to ensure that no one is left behind.

She reported that as part of its support to countries, the World Health Organization (WHO) has developed the first normative guidelines for the prevention, care and treatment of hepatitis B and C to help programme managers plan for and scale up hepatitis B and C prevention and treatment programmes as well as providing guidance to health care providers who care for persons with chronic hepatitis B and C. At country level a national strategic plan is being developed and a functional hepatitis taskforce and Unit under the National AIDS Control Program have been established.

In conclusion, she re-echoed Regional Director’s call for international partners, civil society, and the private sector to support the regional hepatitis response by promoting awareness, advocating for adequate investments and working with Member States to implement the key prevention and treatment interventions. She also reiterated WHO’s commitment to supporting the Gambia move in this direction.

Speaking earlier, Dr. Ramou Njie, a specialist in liver diseases and head of both the Gambia Hepatitis Intervention Study, GHIS based at the MRC, gave a brief account on the situation of hepatitis in the country. She said that from a recent study conducted among 12000 adult Gambians all over the country, about 10 % had hepatitis. These are people who have been infected with hepatitis virus and had not been vaccinated through routine hepatitis vaccination which stared in early 1990s, Dr. Njie noted. She said that hepatitis was therefore very common in the Gambia before introduction of the hepatitis B vaccine into routine EPI services. But thanks to the introduction of hepatitis B vaccination only those who were not fortunate to receive the vaccine are the most at risk.