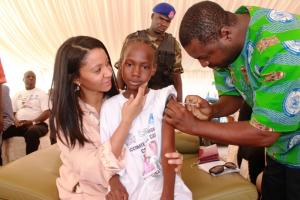 Presiding over the ceremony in the campaign for adolescent girls in West Coast Region (WCR) against Human Papilloma Virus (HPV), Madame Jammeh noted that the disease is preventable with just two doses of the vaccine as she expressed government and partners’ commitment to the fight. She highlighted that the disease is acquired through sexual contact. “Girls are our future and we need to protect them from these preventable diseases and deaths," she stressed.

H.E. Madame Jammeh  said “We know from our health professionals that the vaccine is well tested and very safe and has been used for the past decades in Europe, America and Asia to prevent cervical cancer among women”.

Madam Jammeh informed that the introduction of HPV demo project in The Gambia is by no means a coincidence as evidence has shown that when girls are immunized in their adolescence, cervical cancer morbidity and mortality rates can be greatly reduced .  "Girls are our future and we need to protect them from these preventable diseases and deaths," she stressed.

She used the occasion to remind the people not to miss this 'unique' opportunity to save "our” girls and women from the dreadful disease.

H.E. Zineb Jammeh commended the leadership of the country for providing the enabling environment for the success of the project and commended GAVI for providing vaccines and logistics.

Delivering a joint WHO/UNICEF statement, the Deputy UNICEF Representative Rupert Leighton disclosed that the campaign strategy will target only school girls in grade 3 while the age group for out of school girls would be 9-13 years. He noted with concern that many women die of cervical cancer in the developing world than in wealthier countries but was grateful that it can be prevented through early detection and treatment, but more importantly, through vaccination.

Mr. Leighton pointed out that with the availability of the vaccine in the country, The Gambia now has the opportunity to prevent HPV infection and cervical cancer later on in life when given to adolescent girls before they begin sexual activity.

He described the launching as timely, noting that the First Lady’s presence and the Vice President, H.E. Isatou Njie Saidy, clearly demonstrates government’s commitment to resolve and ensure that the incidence of cervical cancer caused by HPV is controlled.

He finally thanked GAVI for their invaluable financial contribution and reassured Government and partners of WHO/UNICEF continued support in this noble drive.

Other speakers included the Ministers for Basic and Secondary Education, Hon. Fatou Lamin Faye and Health and Social Welfare (MOH&SW), Hon. Omar Sey who commended the 1st Lady and expressed gratitude to WHO, UNICEF and GAVI for their technical and financial support. The two Ministries  worked diligently to ensure that this noble project was realized in The Gambia.

The host, Governor of West Coast Region - Sefai Hydara welcomed delegates to her region and thanked her communities for the warm reception.  The EPI manager gave the vote of thanks and the ceremony was chaired by The Deputy Permanent Secretary (DPS-MOH&SW), Mr. Dawda Ceesay.

The event was graced by drama and cultural groups amidst warm entertainment.