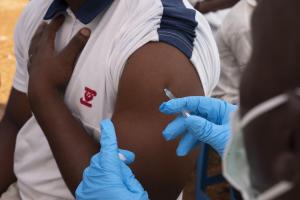 Harare – At the main bus terminus in Harare, Zimbabwe’s capital, travellers heading to neighbouring Zambia can be tempted by offers of counterfeit travel vaccination certificates. A thriving black market there sells a fake proof of immunization for between US$ 15–20, says Dr Integrity Mchechesi, who works with a technology firm to combat such forgery.

Counterfeit travel vaccination certificates can put lives at risk and greatly jeopardize disease control. “We estimate that around 80% of yellow fever travel cards in Zimbabwe are counterfeit,” says Dr Mchechesi, a co-founder and head of innovation at Vaxiglobal, a travel health consultancy.

Vaxiglobal is working with laboratories in Zimbabwe and Zambia, airlines and technology companies to build up a safe and approved digital verification system for travellers’ immunization.

Built on blockchain technology, a decentralized online record keeping system, the database cannot be tampered with.

“It’s often impossible for busy border authorities to verify the names of doctors, and the supposed location where vaccinations occurred, by phone or email,” says Dr Mchechesi, also a senior resident medical officer at the Parirenyatwa Central hospital in Harare.

“After vaccination, the laboratories create a digital record in our system. The traveller gets a QR code on a mobile app or on paper, which is instantly verified by the border authorities, who can see where they got the vaccine and who gave it to them, as well as the batch number of the vaccine, which protects the authenticity of each and every vaccine.”

According Dr Mchechesi, many vaccines are left unused in Zimbabwe, which leads manufacturers to push up the price of production. By reducing the number of shelved vaccines, the initiative aims, ultimately, to help bring the price of vaccines down.

The digital verification system went live in early 2020, and in April the team worked with laboratories across Zimbabwe to use the system for COVID-19 certification. More than 1500 certificates have since been verified, and seven airlines are now using the system at Robert Mugabe International Airport in Harare. As more of Zimbabwe’s ports reopen, the team aims to expand the system under the guidance of the Ministry of Health.

“We recently received approval for the Government of Zimbabwe, and it’s a huge deal now as the borders opened between many African countries,” says Dr Mchechesi.

“All travellers need up-to-date immunization verification and our system should help cut transmission rates across borders.”

The Vaxiglobal team is in talks with South Africa’s government for a potential launch in that country and even an eventual roll-out across the 15-Members States of the Southern African Development Community.

The team is working with biometric data companies to make verification even simpler, through a cloud-based biometric data system that does not even need QR codes.

Vaxiglobal have worked with World Health Organization’s Africa Innovation Team to shape, develop and scale the initiative since 2018. “It has been incredibly fascinating to see Vaxiglobal’s evolving business model to focus on maximising health impact for the African population,” says Dr Moredreck Chibi, Regional Innovation Adviser for WHO Africa region.