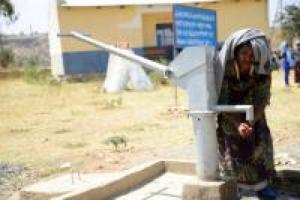 The Government of Ethiopia announced the achievement of the MDG 7c target on access to drinking water supply on 23 March 2015. Today, over 52 million people in Ethiopia have access to clean and safe water, compared to only 6 million people in 1990. This achievement was confirmed after the WHO/UNICEF Global Joint Monitoring Programme for Water and Sanitation (JMP) mission to Ethiopia in November 2014.

“Today’s event represents a great milestone to us, development partners, civil society, NGOs, bilateral, multilateral, public and private sector professionals, as we have joined hands to make this achievement a reality. It is also a historic moment, where Ethiopia demonstrates its political commitment to resolving challenges in the Water and Sanitation Sector,” Dr Mulatu Teshome, President of the Federal Democratic Republic of Ethiopia said on the occasion of the announcement.

The progress has been largely due to the establishment of a Government-led WASH coordination mechanism involving Ministries of Water, Health, Education and Finance and Economic Development, which resulted in ONE WASH programme in 2013 , as well as development partners. Water supply is also at the centre of the country’s ambitious Growth and Transformation Plan (GTP).

Despite the remarkable progress seen in Ethiopia, more than 48 million people do not have access to improved water source and the majority of health facilities in the country lack access to clean water (National WASH Inventory report, 2012). WHO supports the Government of Ethiopia to improve WASH mainly through capacity building activities, but the Organization has also supported Fluoride risk mapping, as well as the development of a strategic framework for climate resilient water safety plans, implementation guidelines and manuals among other areas of technical assistance.

The MDG achievement announcement was made on 23 March 2015 in the presence of H.E Dr Mulatu Teshome, President of the Federal Democratic Republic of Ethiopia, H.E Engineer Wondimu Tekle, State Minister on behalf of His Excellency the Minister Ato Alemayehu Tegenu, Ministry of Water, Irrigation and Energy, Senior Government Officials, Ambassadors, UN representatives, WASH partners and members of the media.