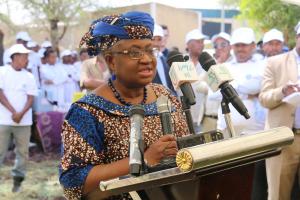 Addis Ababa 11th Feb. 2019: Ethiopia launched measles vaccine second dose (MCV2) vaccination into the routine immunization programme in the second year of life. The official launching was celebrated at Wolenchity Health Center, Bosete Woreda of Oromia Region on 11th February 2019. The launching event was attended by Government higher officials and representativeness from different stakeholders and partners including Gavi, the Vaccine Alliance, the Global Fund, WHO and UNICEF.

Gavi and other several health partners have provided the necessary support to ensure the introduction of MCV2. WHO Country Office team has also provided technical and financial support to the Ministry of Health of Ethiopia starting from planning to preparation and implementation of the MCV2 introduction. About 3,348,363 children will receive measles vaccine second dose during their second year of life annually throughout the country.

Measles is one of the leading causes of death among children globally, particularly in developing countries. An estimated over 100,000 measles death occurred globally in 2017. Measles is a very contagious and terrible disease but it can be easily prevented and controlled by vaccination.

Accelerated immunization activities have had a major impact on reducing measles deaths during the last decades. Since 2000, over 21 million lives have been saved globally thanks to measles immunisations, and during this period, deaths decreased by 84% and measles incidence decreased by 87% from 145 to 19 cases per million persons. However for several years now global coverage with the first dose of measles vaccine has stalled at 85%. This is far short of the 95% needed to prevent outbreaks. This leaves many people, in many communities, susceptible to the disease. In Africa coverage rate of measles vaccine is 70% while second dose is 23%. And in Ethiopia MCV1 coverage in the 2017 WHO-UNICEF estimate is 65%. However, the admin coverage for the same period is 92%.

Measles is endemic in Ethiopia with outbreaks reported annually. Improved outbreak preparedness and response efforts from the Government, as well as measles supplementary immunisation activities (SIAs) the most recent of which was in 2017, have helped to significantly reduce measles cases over the years. Despite the reduced incidence, outbreaks at the sub-national level continue to occur.

Dr Chatora Rufaro, WHO Ethiopia representative during the launching said that “The introduction of the second dose of measles vaccination in Ethiopia will significantly contribute to reduction of measles morbidity and mortality as well as the overall child mortality by preventing measles outbreaks. It also helps to attain the measles elimination goals provided that vaccination coverage in all districts reaches 95% and above for both doses of measles vaccines. Dr Chatora also added that the measles vaccination during the second year of life can also be used as platform to strengthen immunization and other child health services.

He also highlighted that to realize this measles elimination effort, the full engagement of all stakeholders, particularly, the government sectors and health or immunization partners, and the communities at large are very important. ”

“Adding a second dose of measles vaccine to the national immunisation schedule will protect more Ethiopian children against this deadly disease that can only be prevented with a vaccine,” said Gavi Board Chair, Dr Ngozi Okonjo-Iweala. “Giving this second dose in the second year of a child’s life is also an opportunity to provide additional health interventions making routine immunisation a preventive, cost effective, and high impact intervention that strengthens primary health care (PHC) systems. Children are less sick, can attend school and be better educated to contribute to the prosperity of their country.”
In September 2011, the Sixtieth Regional Committee, by its Resolution AFR/RC61/R1, adopted a goal of measles elimination for the African Region by the year 2020.