Engaging stakeholders around key achievements in the health sector

The World Health Organization in Namibia engaged stakeholders from the public and private health care to deliberate on key milestones within the health sector and to share the Organization’s strategic direction for the next five years.  This is in lieu of the Organization’s approving a new Global Programmme of Work which sets the tone for the global public health agenda consequently the local office strategy for the country.

Speaking on behalf of the Minister of Health and Social Services, the Executive Director of the Ministry of Health and Social Services, Mr Ben Nangombe, appreciated WHO’s contribution towards the promotion of health and the improvement of health care in the country.  He directed the meeting to key achievements in the areas of health systems strengthening, combating of priority diseases, improving maternal, neonatal and child health, addressing health emergencies and health promotion.   He referred to the commitment of government to address non-communicable diseases.   The launch of the national multi-sectoral strategic plan for the prevention and control of non-communicable diseases (NCDs) by the Prime Minister in 2018 is a key milestone for government to address both risk factors associated with NCDs and the provision of comprehensive quality care for major NCD’s such as cancer, diabetes and cardio-vascular diseases.  He also informed the meeting that the Ministry re-opened the Etegameno Alcohol Rehabilitation Centre with support from the Ministry of Defense.

The extensive investment by the European Union in maternal and child health through the Programme for Accelerating the Reduction of Maternal and Child Mortality (PARMaCM) has made positive impact on maternal health.  The programme was jointly implemented by the Ministry of Health and Social Services and WHO over a 5 year period.  The 10 million euro programme can be associated with a reduction in maternal mortality in 2017 of 195 per 100,000 population compared to 299/100,000 in 2010.  The programme also contributed significantly to the 86% facility delivery through the construction of maternity waiting homes in 3 regions thereby enabling women in remote areas to deliver in health facilities.

In his welcome remarks, WHO Representative, Dr. Charles Sagoe-Moses, said that the health sector has achieved a lot over a period of time and that there is need to recognize and applaud the government for these achievements. He then referred to WHO 2018/2019 biennium which also marked WHO’s 70th anniversary and the organization’s 29 years operation in Namibia.   This period saw the establishments of the medical school with support from WHO.  He further referred to the country’s achievements of being wild polio free since 2008 through improved surveillance.  He said that there has been tremendous expansion in health services from the medical officer delivering care in the facilities to the community health care worker in the remote parts of the country.

He further referred to the fact that the organization had to re-engineer itself to be more responsive in a changing global health environment.  This led to a review of the organization to determine how ‘fit for purpose WHO is. This then led to the development of the Country Cooperation Strategy to be able to meet the needs of the vulnerable and the expectations of the government and partners.  In concluding his remarks he emphasized the need to ensure universal health coverage, protect every Namibian from health emergencies and to promote healthy lifestyle amongst the population.

The meeting highlighted key achievements in TB treatment success rate at 86% which is short of 4% to the global 90% target.  Despite the resurfacing malaria outbreaks, the country maintained malaria death rate at below 4 per 100,000 population a 55% reduction compared to level of 2009 death rate which is way above the 2020 global target of 40% reduction.  The country immunization coverage also received a lot of praise with certain vaccines being over 80%, meeting and exceeding global targets.  Despite the numerous successes in the health sector, WHO in partnership with government still has a lot of ground to cover and aim to strengthen interventions in all aspects of health to address some of the challenges and maintain the progress made in the sector. 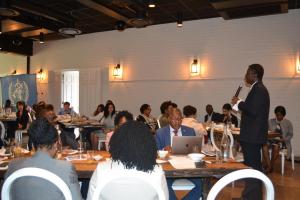