Ebola vaccinator scaling the hurdles to save lives 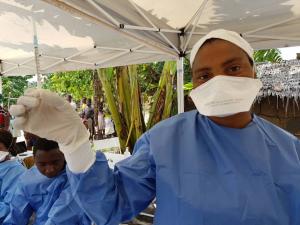 Ebola vaccinator scaling the hurdles to save lives

“From the moment I arrived, my mission was to save lives. I am proud of it,” says Dr Aissatou Bah, a member of the World Health Organization Ebola vaccination team in Beni, a town in the northeast of the Democratic Republic of the Congo (DRC).

She has crisscrossed this part of DRC, from Beni to the furthest reaches of North Kivu Province, travelling to some of the remotest communities to track people who may have been in contact with an Ebola patient and vaccinating residents.

Dr Bah, from Guinea, has been involved in the Ebola response in the DRC for more than a year. She and her team spent eight months carrying out ring vaccination of people at high risk of Ebola. “With Ebola, there is not a minute to lose,” she says, also pointing out the hurdles. “There were always two issues we had to deal with: security and the resistance of the community.”

One particular incident stands out in her memory. The team had set out from Beni for the village of Oicha, a hotspot some 30 km away. There had been two confirmed cases of Ebola in the village and there were contacts known to be at high risk. Along the way, the group was ambushed, but managed to escape unharmed.

“Everyone was stressed. But we had to remain calm. We knew we had to meet our objective,” says Dr Bah. The team managed to vaccinate 169 people and safely drove back to Beni.

In addition to dealing with insecurity, working to gain community acceptance is also critical to the Ebola response. Before any vaccination campaign can begin, a community engagement team goes to a village to explain to the residents what Ebola is, how to prevent getting infected and what the vaccination involves.

“We explain to them that if you are in direct contact with someone who has Ebola, if you have washed their clothes, for example, you are at high risk, and that is why we want to vaccinate you so that you don’t fall ill,” says Dr Bah.

Over time, as the vaccinators provided more information and answered peoples’ questions, they found that the residents became more accepting of the vaccination. It also helped that some members of the team picked up the local language to speak with the people.

As the epidemic evolved, and with the issue of community reluctance, it became clear that there was a need for greater understanding of the context. So the team began to train local people in the locations they visited. As more and more locals began to give vaccinations, the task of community protection was gradually handed over to local counterparts.

Once the need for vaccination in Beni and the surrounding region was reduced, Dr Bah took on managing the vaccination archives. Now based in Beni, she recalls how an attack on the hotel in which she and other members of the response team were staying was destabilizing.

“After the attack, because of all the insecurity and the stress, there were many people who returned home. But for me, (being in Beni) was an opportunity to come and contribute to saving lives. And everyone involved put in the work to go to the very end. I can say that this experience has really educated me. I have learned a great deal.”