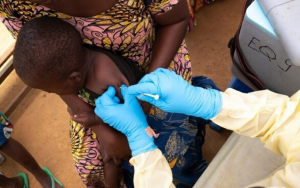 The courtyard of the Musuniene Health Centre, normally quiet, rings with the sounds of adolescents running, playing and chatting in the open space, undaunted by the intense heat. The youth – all students at the Centre Professionnel Vusigha, a local technical school – are waiting for their turn to be vaccinated against the Ebola virus disease. Jean-Marie Kambale, their teacher, emerges from the health centre and proudly displays his vaccination certificate. “I am very happy because I am now protected against Ebola,” he said. Kambale had brought 50 of his students to be vaccinated.

Musuniene, a large village about an hour's drive outside the city of Butembo, sits within territory held by the Mai Mai armed group. Despite the security risk, a vaccination team is in place to make sure that a number of people who are listed as contacts of Ebola patients and who have recently travelled to Musuniene are reached with vaccines. They are also vaccinating first-line health workers who have recently joined the team to serve in Ebola transit centres. When Kambale heard radio messages about the ring vaccination campaign, he decided the best course of action would be to bring the children to the health centre. Under the protocols implemented by WHO, all those who are contacts of people who have been diagnosed with Ebola, everyone who is a contact of a contact, and all those who are probable contacts – anyone in a health zone where there is a confirmed case – are eligible to receive the vaccine.

“I am also very happy because those who vaccinated me are the people who speak my language, so I could talk with them and ask them a few questions without difficulty,” adds Kambale. The fact that the vaccinations are carried out by local people has been critical to the success of the campaign. As part of the activities on preparedness for the threat of Ebola, four teams of vaccinators – 60 people in all – arrived in North Kivu province in August 2018 to assist with the vaccinations. The team included Guineans, one person from Niger, and Congolese, all of whom were perceived as outsiders – even the Congolese, who had been trained in the capital, Kinshasa. But as Sister Zawadi Fikiri, manager of the Musuniene General Hospital, explains, “Initially, there was a lot of resistance among the local people because the vaccinators were foreigners.”

This sentiment was echoed by Dr Moise Kabuyaya, Chief of Medicine of the hospital. “As you know, there are a lot of lies and prejudice around the subject of the Ebola vaccine. The villagers want to be vaccinated by people they know. When they are treated by a brother, they will easily consent and accept the vaccine because they know that their brother will not hurt them.”  Because it was critical to move quickly with the vaccinations, they were initially carried out by experienced experts from Kinshasa and from outside the country. But, as the outbreak evolved, and because there was community resistance o the outsiders, it became clear that there was a need for greater local understanding. So in addition to carrying out vaccination, and as time allowed, locals were trained to carry out the vaccinations. The majority of vaccinators trained were selected from local communities in North Kivu. As Sister Fikiri notes, “It has become easier [to carry out vaccinations]; we have trained local vaccinators, and this is why the villagers are agreeing to receive the vaccine.”

The training and the preparations are leaving a strong legacy. Dr Aly Mampan Koundouno, vaccination team lead in Butembo, noted: “Today, one year into the outbreak response, there are 31 teams of vaccinators – 580 people in total, 552 of whom are Congolese, and of this group, 477 are from North Kivu province.” He goes on to say, “There are 149 vaccinators who serve the Butembo sub-coordination area. Only five of them are international; the remainder are from the local community.” It is a legacy that the Congolese see benefitting not only their country but one they can then give back by helping other countries, should a crisis strike. As Dr Jeannot Kambale, a Congolese vaccinator with WHO, also points out, “Now we can not only carry out the ring vaccination protocol for Ebola virus disease, but we are capable of carrying out any vaccination campaign necessary in Congo and beyond.”

And if anyone doubts the efficacy of the Ebola vaccine, Dr Kabuyaya is the perfect demonstration of the importance of the vaccination: during a surgical operation in April 2019, while he was cleaning the patient’s abdominal cavity, blood spurted and struck Dr Kabuyaya in the eye. “Can you imagine what was going through my mind when I found out that the patient had tested positive for Ebola?” he says, six months later. He was held in isolation for 21 “interminable” days, separated from his wife, who had just given birth to their son. “It is thanks to the Ebola vaccine, which I had received a mere two weeks before [the surgery], that I am here to tell you my own story of Ebola.”