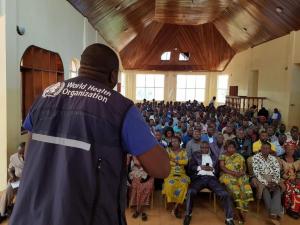 It’s been a little over a month since the Ebola outbreak in North Kivu province in the Democratic Republic of the Congo was declared by the Ministry of Health. In the hotspot of Mangina, which is a rural community much progress has been made, but a new case in the city of Butembo is raising concern.

Dr Ibrahima Socé Fall, WHO Africa Emergencies Director visited Mangina, where many of the first confirmed cases originated and found the work done by the Ministry of Health, the World Health Organization (WHO), and other partners impressive.

He said, “Now everything is working very well. You can see the number of cases in Mangina is going down on a daily basis. We need to continue the same effort to make sure that all cases are controlled in Mangina.”

However, about 90 km away in the bustling city of Butembo with a population of around one million, a new case was confirmed on 4 September by health authorities. The case is the mother of a woman who died of Ebola in Beni, which is close to Mangina.

Dr Fall said, “Butembo is the new hotspot. It’s important for the response to be quick and strong, combining all the key components, with strong community mobilization to stop the virus from spreading in this new hotspot.”

Butembo is a major trading centre, with a highly mobile population that comes from not only other parts of the DRC, but also from neighbouring Rwanda and Uganda and even as far away as Kenya.

Despite the difficult situation, under the leadership of the Ministry of Health, WHO and partners are scaling up the response to the outbreak in Butembo. More than 60 WHO experts are in the city, setting up key operations.

Along with health authorities and Médecins Sans Frontières, WHO’s team leader for the Butembo outbreak, Dr Marie Roseline Darnycka Belizaire visited the grounds where the new emergency treatment centre is likely to be set up. The Emergency Operations Centre, which will be the nerve centre of the fight against Ebola in Butembo is also being built and is expected to be operational early this week.

“The next two weeks will be crucial to controlling the outbreak in Butembo and we have already made good progress in putting in place crucial elements for an effective fight against Ebola,” said Dr Belizaire.

A mobile laboratory is now operational and has begun to accept samples and conduct diagnostic tests to determine whether they are positive or negative for the Ebola virus.

In an effort to strengthen response activities, ring vaccination of health care workers, as well as of the contacts and contacts of contacts of the confirmed case from Butembo began last week. So far more than 200 people have been vaccinated. WHO experts are also visiting health clinics and explaining the benefits of being vaccinated against Ebola.

WHO and UNICEF risk communication experts have been working with health authorities to engage with key communities and raise awareness regarding the symptoms of Ebola and how to prevent it, as well as what to do if a case is suspected. On 8 September, more than 300 community leaders were sensitized in a briefing at the City Hall.

Katsaruhanee Kasera, Chief of Kambali Ward, who participated in the briefing said: “As leaders, we can’t accept that our people catch the disease, especially since it is very dangerous. We are going to popularize this information among our people as we are community leaders.”

In another training, WHO worked with 50 radio and television reporters to increase their cooperation in reaching out to the public with key messages including the signs and symptoms of Ebola, encouraging people to bring patients early to the Ebola Treatment Centre and accepting safe and dignified burials. 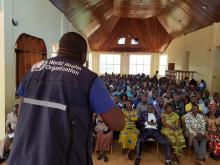 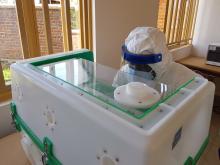 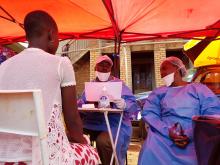 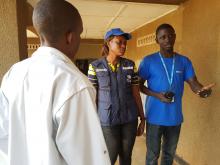 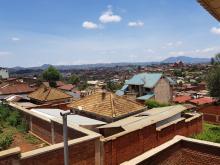