Ebola outbreak in Democratic Republic of the Congo declared over 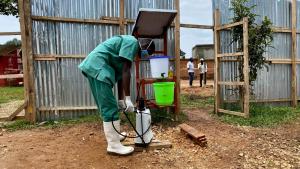 Ebola outbreak in Democratic Republic of the Congo declared over

The World Health Organization (WHO) congratulates the Democratic Republic of the Congo’s health authorities and the heath workers on the ground for their swift response which built on the country’s previous experience in tackling Ebola outbreaks. This outbreak is the country’s  fourth in less than three years.

Eleven confirmed cases and one probable case, six deaths and six recoveries were recorded in four health zones in North Kivu since 7 February when the Ministry of Health announced the resurgence of Ebola in Butembo, a city in North Kivu Province and one of the hotspots of the 2018–2020 outbreak. Results from genome sequencing conducted by the country’s National Institute of Biomedical Research found that the first Ebola case detected in the outbreak was linked to the previous outbreak, but the source of infection is yet to be determined.

“Huge credit must be given to the local health workers and the national authorities for their prompt response, tenacity, experience and hard work that brought this outbreak under control,” said Dr Matshidiso Moeti, WHO Regional Direct for Africa. “Although the outbreak has ended, we must stay alert for possible resurgence and at the same time use the growing expertise on emergency response to address other health threats the country faces.”

The response was coordinated by the Provincial Department of Health in collaboration with WHO and partners. WHO had nearly 60 experts on the ground and as soon as the outbreak was declared helped local workers to trace contacts, provide treatment, engage communities and vaccinate nearly 2000 people at high risk, including over 500 frontline workers.

The response was often hampered by insecurity caused by armed groups and social disturbances which at times limited the movement of responders. The area where the outbreak took place is one where the population is highly mobile as people move to conduct business or visit family and friends. Butembo city is about 150 km from the Uganda border and there were concerns over the potential cross-border spread of the outbreak. However, due to the effective response the outbreak stayed limited to North Kivu province.

While the 12th outbreak is over, there is a need for continued vigilance and maintaining a strong surveillance system as potential flare-ups are possible in the months to come. It is important to continue with sustained disease surveillance, monitoring of alerts and working with communities to detect and respond rapidly to any new cases and WHO will continue to assist health authorities with their efforts to contain quickly a sudden re-emergence of Ebola.

WHO continues to work with the Democratic Republic of the Congo to fight other public health problems such as outbreaks of measles and cholera, the COVID-19 pandemic and a weak health system.

The 2018–2020 outbreak was the 10th in the Democratic Republic of the Congo and the country’s deadliest, with 3481 cases, 2299 deaths and 1162 survivors. The country also experienced its 11th outbreak which took place in Equateur Province last year.

Currently there is an ongoing Ebola outbreak in Guinea, which began in February of this year.