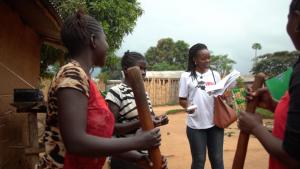 Beni, 10 March 2020 – In a small commune of mud and wattle homes in Beni, Rose Amboko walks into a family garden, a flash thermometer in hand. In this last remaining Ebola hotspot in the Democratic Republic of the Congo (DRC), mistrust and suspicion have been major factors in prolonging the outbreak. But here, Ms Amboko, 25, is welcomed as a friend, as she comes to monitor these close contacts of an Ebola patient, to make sure they’re in good health. Two women pounding cassava leaves in a pot joke with her as she takes each person’s temperature, and as Rose calls each by name, the children come running to take part in what they have come to see as a game.

It has not been easy to create this kind of confidence in Beni. Constant instability and violence mean that mistrust of outsiders has become a means of self-preservation here. While trained medical staff are crucial in responding to an epidemic, one of the biggest lessons from this outbreak has been the importance of community participation. It is obvious that Ms Amboko enjoys her work, and that her easy smile and gentle manner help create good community relationships. “It’s taught me to speak to people. When you’re following up with contacts, you really need to be able to talk to people and that builds relationships. When the 21 days’ monitoring are over, they’re happy and they thank us, and that creates a relationship with the community.”

Dr Houssainatou Bah is the World Health Organization (WHO) Health Operations Manager for the Ebola response in Beni. She spent over a year in charge of Ebola surveillance teams, where hiring staff from the community was a priority. “We ask first that people are local, that they know the conditions of life and the cultures here, they speak the local languages. That way, they’re easily accepted. They know best what to say and who to speak to in order to convince people.”

This strategy also has the potential to be a long-term investment in local health services. Ms Amboko is one of more than 3 000 local workers trained by WHO in community engagement, risk communication, and contact tracing. Following several months with WHO, she has now transitioned to working for the DRC health ministry, where she has been promoted to supervisor of a local team monitoring high-risk contacts in the community. She says the training and experience she got working for WHO are valuable assets for her career. “I learned a lot with WHO,” she says. “I learned teamwork, and how to speak in front of people, because at WHO we needed to speak in front of everyone in meetings. I also know how to write daily reports. I learned how to behave in the field and how to work in difficult places. In the training, we learned about security. We learned how a humanitarian worker needs to act in the community and in the field.”

It was during her time working for WHO that Ms Amboko faced one of her biggest challenges, during a sustained outbreak of violence in the town, which lasted for a month, endangering Ebola response workers in the field. “Before going into the field, WHO had given us safety training and we had had a briefing,” she says. “We had been shown how to act in the field, how to go where people might not be ok with you, how to behave where people were reticent. We had to be discreet, we couldn’t wear anything with WHO logos. If people saw that you were from WHO, they could easily attack you. I think WHO training really helped us. That’s how we got through it safe and sound.”

As the last patient leaves the Ebola treatment centre in Beni, and the last contacts are monitored, trained local community workers like Ms Amboko will play in important part in the transition period after the epidemic ends, and potentially far beyond.

Dr Bah is convinced of the importance of non-clinical staff to keep communities engaged with the healthcare system, building on the groundwork of local Ebola response teams. “The durability of this knowledge is important. When everyone else goes home, they are already home here. If there’s ever another epidemic, they’re already prepared and they know how to manage the initial response, until outside support arrives. These people could really help to boost the healthcare system.”

“Beyond the eventuality of another epidemic, Dr Bah believes local communications workers have a much wider role to play. “The health system is always based on the community. Community workers contribute to monitoring all illnesses and anything unexpected in the community. There are many other diseases which appear which people can monitor, for example certain endemic pathologies like malaria. Prenatal services and children’s vaccination programmes are two services which really need local communications people. The health system needs them, to improve all health indicators.”

When the hard work of getting to zero Ebola cases is done, those who played a part will still have much more to offer.