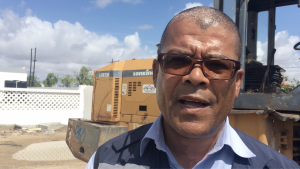 What has been your role in the response?

To see the impact on human health. As a consequence of the disaster the whole team is monitoring disease through epidemiological surveillance. For example, cholera prompted a massive vaccination campaign and other interventions in sanitation and the provision of clean drinking water that have contributed in a major way to lowering the number of cases.

As cholera goes down malaria becomes another public health issue of greater concern so we are also working on it.

We also worked with nutrition colleagues to see the impact of malnutrition as families lost their vegetable gardens, farms and their food reserves which caused a situation of vulnerability and food insecurity that could contribute in the very near future to malnutrition - especially in children.

So our concern is to see what kind of health operations can help people recover in the immediate and post-disaster period as well as work with provincial and district health authorities to return to normal health services.

And where damage has been sustained, health centre repairs, retrofitting and all the monitoring and reporting tools need to be put in place to allow normal operation here in central Mozambique.

You just returned from Chimoio. What is happening there?

Much of the post-Idai operation is based in Beira as Sofala province was the most impacted. But the neighboring provinces also need our attention. That is why I went to Chimoio, the capital of Manica province with the provincial authorities and their partners to see what the impact was in terms of sanitary infrastructure. For example, which centers lost their assets and what was the effect on people's health. We noted that malaria cases in that area are increasing as well as acute infections and malnutrition.

Meanwhile, the number of accommodation centres is being reduced. The province's policy is to make every effort to get people back to their normal lives by avoiding large groups of people that can become a public health hazard. Resettlement work is currently under way in the province, which we as WHO are pleased with.

Related Links
Faces of the Response to Cyclone Idai in Mozambique