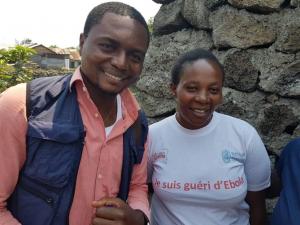 Since December 2018, the World Health Organization (WHO) and other partners have worked in collaboration with the DRC Government to respond to a possible Ebola outbreak in Goma. Dr Ramazani Kalumbi Ramses is in charge of epidemiological surveillance for WHO in Goma. He oversees 17 health zones. The following is his account of managing the first Ebola case in Goma.

Goma is a major trading hub for Eastern DRC and thousands of people travel here from the Ebola epidemiological zones. The risk of Ebola coming into the city is high. So we have been preparing.

We have put in place an alerts system, trained more than 300 investigators, 1 700 community health “agents”, more than 2 000 caregivers and traditional practitioners and more than 300 tracers tasked with following up contacts of confirmed Ebola patients. We have established 17 entry points and screening points around the city of Goma. We have implemented a research cell for unidentified and lost contacts – a team that tracks all the missing contacts [people who may have been exposed to the virus] from the hot zones and returns them to their health zone for the rest of their follow-up period.

In the process, we have had several alerts [possible cases] for months, but all were negative for Ebola virus disease. We knew it was a matter of time, but the challenge for us – WHO and the Government – is would we be ready? Would we identify the patient quickly, isolate and treat as well as stop the spread of the virus in such a big city?

One of our young investigators called the Ebola Alert Centre describing a suspected patient he had just investigated and asked us to check if he was listed as a contact in Butembo, one of the Ebola hot zones. We checked. He was not in those lists.

The patient was a pastor who came from Beni via Butembo [both Ebola hotspots]. He arrived in Goma that day by bus. He went to the home of a fellow pastor who asked him to go to a health facility because his health condition was not good.

He arrived at Afia Himbi Health Centre where he found Ebola-trained staff who immediately escalated the matter to the alert centre. The patient was investigated and transferred to the Ebola treatment centre in Goma. The patient proposed to give a bribe to the health worker and the investigator so that he could be treated at home, but fortunately, both of them refused that proposition and helped him to understand that he will receive better care at the Ebola treatment centre. The patient was isolated for treatment in less than three hours after his arrival to the city. By now, he was still a suspected case awaiting lab tests.

“We have a confirmed Ebola case,” the government coordinator of Goma said.

“The pastor?” I exclaimed.

Although I was disappointed that Ebola had finally reached the city, I also knew this is the moment we had been preparing for. We went into crisis mode. The next steps were critical and must be done right.

The point is to stop the transmission of the virus within the population. First, we determined the pastor’s itinerary, searched for the bus manifest and traced all the patient’s contacts [travellers] and vaccinated them within 72 hours. These contacts will be followed up for 21 days to monitor their health.

There were two women from the patient’s village who had travelled with and took care of him during the trip. After a risk analysis and investigations, we decided to send them back home to Beni where they will be taken care of and followed up. Unfortunately, one of them developed Ebola in Beni and died. Returning her to Beni enabled us to avoid a second Ebola patient in Goma.

On the evening of 29 July, I received a call from an investigator asking me to check the Ituri [another Ebola hot zone] contact lists for a male patient who had just been investigated in a health facility in Nyiragongo, at the outskirts of Goma. This patient was not included in the lists and had no connection to the first case in Goma.

By morning, the lab confirmed the patient to be sick with Ebola. We visited the family and found two of his children with symptoms and took them to the treatment centre, but only one of them tested positive.

A day later, the wife showed signs and was taken to the treatment centre. She tested positive.

From these three confirmed patients, we found a total of 235 contacts who were vaccinated and followed up – 202 of them resided in the same health zone.

The father succumbed to the disease, which caused enormous pain to the family, community and those of us who worked with them. We visited the family every day to console them for the loss as we tried to save the lives of the other sick loved ones.

At last, a day of joy arrived: 13 August

Throughout their hospitalization, the medical care teams did a wonderful job. They treated them using the new drug, which turned out be very effective. The mother and son tested negative and healed within 12 days.

It is an immense joy for us to see this mother and child return to the community free from the disease. We witnessed the joy of the neighbours, too. We sang and danced together. This was the victory of an entire community that chose to comply with the rules of hygiene and the advice of the response teams and that gives the hope of the end of the outbreak in their village.

A day like this is unforgettable. Days like this motivate us and give hope to an entire city.

This is a triumph, but the battle is not yet over. We remain focused on our goal of completely ending this tenth outbreak of Ebola.